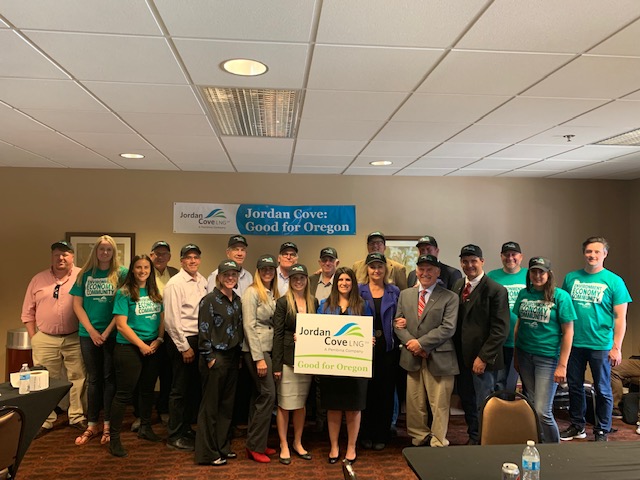 MEDFORD, OREGON  —  A delegation of 16 members from the Western States and Tribal Nations and Consumer Energy Alliance (CEA), a national advocate for energy consumers, today gave comments at a Federal Energy Regulatory Commission (FERC) hearing in Medford in support of the Jordan Cove Natural Gas Project.

The hearing is part of FERC’s process to take comments from the public on its Draft Environmental Impact Statement on the project, which includes a proposed 229-mile connector pipeline from near Malin, Oregon, to a planned natural gas liquefaction plant in Coos Bay, Oregon.

The goal is to export the cleaner-burning natural gas produced in basins spanning Colorado, Wyoming, Utah and the Ute Tribal Nation, including the Piceance, Uintah and Green River basins, to Asian markets that now use dirtier fuel sources to meet their energy needs.

Members of the delegation from government bodies in all three states gave comments demonstrating the economic and environmental benefits of Jordan Cove to not only their communities, but the United States and the world.

“We can argue about global warming and climate change, but the facts are pollution is real. There is no arguing that. It knows no boundaries and doesn’t stop at state, county or country lines. It becomes a world problem. We have natural gas that is stranded and not used so it is being flared or vented to no benefit. We could be shipping this gas to other countries to replace other dirtier sources of energy and receive the benefits to our economies and environment.”

“The Jordan Cove project is a great economic driver for our northwest Colorado communities and will help stabilize our economies from fluctuations in the oil and gas market for over 20 years. It also helps us to then continue to diversify our economies and make our counties fiscally stronger.”

“Minerals are a tremendous resource in the State of Wyoming and continue to help create jobs. This project helps Wyoming move its resources to the markets that can generate the greatest benefit for the most people, through tax revenues and the export of cleaner-burning natural gas to countries that need it to lower their carbon emissions.”

“This is a critical opportunity of the future of natural gas in the Piceance Basin, because it capitalizes on existing infrastructure that is underutilized.”

“Approval of this project would not only create jobs as carpenters and millwrights for people transitioning out of the coal industry, but training opportunities for tribal youth and other residents of rural Colorado and Utah. This would create hundreds of jobs in the state of Oregon, including 211 permanent jobs, not to mention ongoing maintenance and service on the pipeline and the plant. This is a winning project for the West.”

The Ute Tribal Business Committee, which did not attend the event, said:

“The Ute Indian Tribe supports Jordan Cove in its application before the FERC. The Tribe encourages support and collaboration to make the Jordan Cove LNG project a reality, because it will promote responsible environmental stewardship by producing cleaner-burning natural gas to be sold to countries across Asia that now use much dirtier fuels. At home, the project will advance tribal self-determination and boost economic development not only for our tribe, but for every community involved in the project,” the Ute Tribal Business Committee said in a statement.