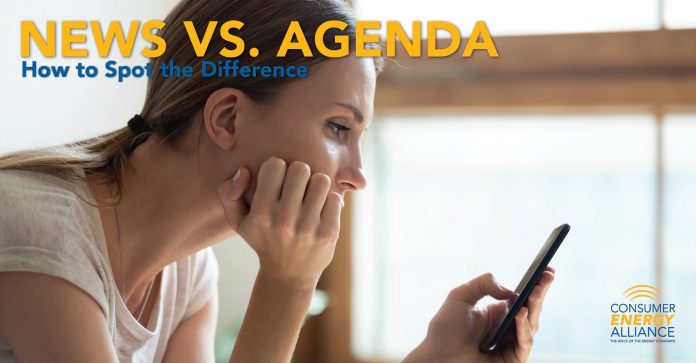 Real news gives us facts about important issues like energy, the economy, the environment and anything else that matters to us. As news consumers, not only do we need to know who’s playing straight with us and who’s play-acting – we want to know.

Since energy affects all of us in so many ways, it’s important to know who’s telling you the truth, and who’s pushing an agenda and why. As a former journalist at Reuters, the world’s largest news organization, with nearly two decades of experience verifying facts and digging for the truth, I can tell you that it’s never been harder than it is right now to discern fact from fiction and news from opinion.

Our oversaturated digital media environment moves faster than the speed of human comprehension, a fact plenty of people are counting on when they push their agenda your way. The Russian intelligence services knew this well when they plied our social media networks with propaganda bots to stoke energy protests in 2017 – and they’re doing it right now with the George Floyd unrest.

It’s an insidious use of our free speech environment, which gives everyone the right to make their case in the court of public opinion.

Let me be clear that there’s nothing wrong with publicly advocating an agenda – that’s democracy at work. But when you pretend to be something you’re not, you’re cheating and that’s likely because your position won’t stand up to scrutiny or you don’t have the facts to make your case or write your story. Professional journalists know they have to have the facts to be accurate and are trained to provide a balanced picture and keep their opinion out of their work.

After I left journalism and joined the communications and advocacy world, I became free to take a side. I write here as an advocate for Consumer Energy Alliance, on whose behalf I communicate how energy affects our families, farmers and small businesses and why it’s important to keep it affordable and reliable. As an information consumer, now you know the agenda I bring to the energy discussion.

But leaving journalism didn’t mean abandoning the ideals of the profession which never failed me, in more than 20 countries and some of the most hostile places you can think of: fairness, integrity and fidelity to facts. It is my privilege to have spent most of my 17 years in journalism at Reuters, an organization so committed to those ideals that it has a separate, independent board to ensure they are upheld.

My tolerance for dishonest and disingenuous “journalism” and “journalists” is zero, because it is an insult to those who practice it honorably every day. It contributes to a growing impression across the world that the media cannot be trusted – something that might get you shoved around by the police here, but can get you killed in some countries.

Ethically, I can no longer present myself as a journalist if I want to gather information. If I write for publication, I belong in the opinion section.

But that doesn’t stop lots of activists from posing as journalists when they want information and presenting their opinions as journalism for PR companies or “news” organizations that are nothing more than mouthpieces for a particular interest group.

Here’s how to identify them in the energy discussion or any other matter of public importance:

Rule of thumb: If a self-proclaimed watchdog shouts the loudest about a company or industry “hiding” its actions, but doesn’t disclose its own backing or activities, chances are they’re funded by a commercial competitor or ideological opponent.

Their smear stories are all the same. They’ll check the box of calling/emailing their target for comment, but I promise you, the story is written before they make the call (if they even bother) – because it’s not journalism, it’s propaganda.

Whatever comment they take will be either a) buried at the bottom of the story or b) partially quoted and immediately followed by “But critics say…” in the next sentence.

When you read “But critics say,” the correct translation is “The writer’s opinion is…”

The headlines and story will be littered with word choices designed to provoke negative feelings and colorful adjectives about the target – think denier, fracked gas, GMO, tobacco company, secretive. Or they’ll mention X company being linked to Y political figure in the headline to insinuate some improper advantage was gained.

Another clue will be pretending that publicly available documents, emails or videos are “leaked” or “reveal” something a company was trying to do “quietly.”

If you see quote surgery like this, you’re being manipulated: The author quotes “just a few words” from a long sentence mentioning something intriguing like “political heat” because the full quote wouldn’t fit his/her opinion, and pretends that is “journalism.”

These stories pantomime the look and feel of an investigative journalism expose because they lack a smoking gun or Deep Throat. Instead, they rely on innuendo and insinuation to paint everyday advocacy work – the exact same work they are performing and many of their affiliated interest groups engage in routinely – as a secretive and somehow negative affair.

The saying goes that a lie will travel halfway around the world while the truth is putting on its shoes. People rarely mention that when the truth catches up and kicks down the door, it’s wearing a pair of steel-toed boots – with facts for soles.