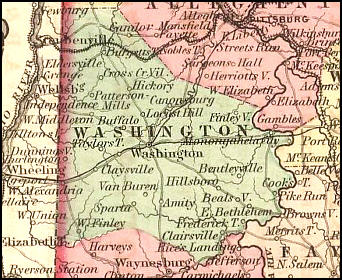 Consumer Energy Alliance (CEA) Mid-Atlantic along with the Washington County Chamber of Commerce recently hosted a panel discussion about the nation’s energy future and security. The event highlighted the importance of responsible energy development in the context of new opportunities for economic growth and manufacturing.

Browning said, “The common thought among all the panel members here today is that the natural gas industry in the region has had a huge impact on Washington County over the past several years.”

“This is a big deal in the county. Gas isn’t going away,” Broadbent said.  “We need more steamfitters from the Washington County area to do this type of work.”

Ken Broadbent from Steamfitters Local 449 stressed the need for local workers in the Marcellus Shale region, with the hope that young men and women will consider career paths as welders and pipefitters.

“I don’t want people from Texas and Oklahoma welding in your backyard. I want your sons and daughters welding in your backyard.”  Broadbent went on to say, “I tell these kids, if you can weld you can make $80,000, $100,000, $120,000 a year.” He added, “When they are properly trained they are getting jobs right out of our apprenticeship program. There are (those) who go to school four, six or eight years and there’s no promise of a job.”

“The Marcellus Shale is really the driver. Every project we do, we’re desperate for welders. Where they have been coming from is Oklahoma, Texas and other gas fields. We need the local young men.”

McCarthy also spoke of the strategic partnership between Chapman and Local 449 and how the company is helping with manpower. “We have a classification of workers known as ‘metal trades workers.’ Three years ago we had none. Today we have 16 of those workers. They have allowed us to tap into the resources of Washington County. They are local employees.”

With the Marcellus region and other shale plays around the country producing more natural gas, fellow panelist Kurt Barshick, General Manager of U.S. Steel’s tubular division said his company is seeing a growing demand for its pipe products and the low price of domestically produced natural gas has also helped the steelmaker to lower its production costs.

“It’s making us very competitive against foreign producers, which pay a much higher price for natural gas. Much of the competing product comes from foreign countries, including China and South Korea, whose governments are subsidizing the products to make them cheaper.”

With CNBC recently claiming that the “Marcellus Turns Pennsylvania Into ‘Saudi Arabia’ of Natgas,” it is no surprise that many domestic and international companies are looking to play a part in this exciting time for Washington County, the state and the nation.

With this in mind, it is important to continue having a thoughtful discussion on both the tremendous benefits responsible shale gas production brings to both our state and nation and why low, stable energy prices are paramount to ensuring an energy future that is strong, reliable, and beneficial to all consumers. CEA Mid-Atlantic looks forward to continuing this dialogue through a series of events planned for 2013, including the Pennsylvania Energy & Manufacturing Summit later this year.