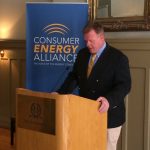 If enacted, EPA’s proposed rules would significantly squeeze the nation’s energy infrastructure, cause substantial reliability concerns and ensure higher electricity prices across the board.

The proposed rules could cost Americans $17 billion a year more to pay their electricity bill, and hit the economy with $50 billion a year in new costs. These alarming figures are at the center of debate as the EPA continues to host a two-day public hearing on the proposed policies that began today at the EPA Region 8 Building in Denver.

“In an environment where Colorado and the nation continues to recover from the worst recession since the Great Depression, EPA’s Clean Power Plan would have a major effect on urban areas while negatively impacting fragile rural communities who receive their energy through electric co-ops. In addition, the approximately 3,500 Local 111 members who work for electric association/co-ops, generation/transmission companies, and investor-owned utilities will see a substantial threat to their middle-class careers; careers that include health and retirement benefits.”

“EPA’s aggressive timeline allows states only one year to develop a very complex plan that will need to address a series of adjustments to their electricity generation, consumption and energy infrastructure. Forcing through regulations of this magnitude in such a short timeframe will limit the ability of states and stakeholders to thoughtfully prepare for the drastic changes that this rule will cause. If this Administration is comfortable spending more than five years evaluating the Keystone XL pipeline, it should feel comfortable taking its time to craft a thoughtful rule that fully evaluates the consequences of its proposed actions.”

“It doesn’t take a study to see what the impact if this rule will be. When power plants close, we lose jobs.”