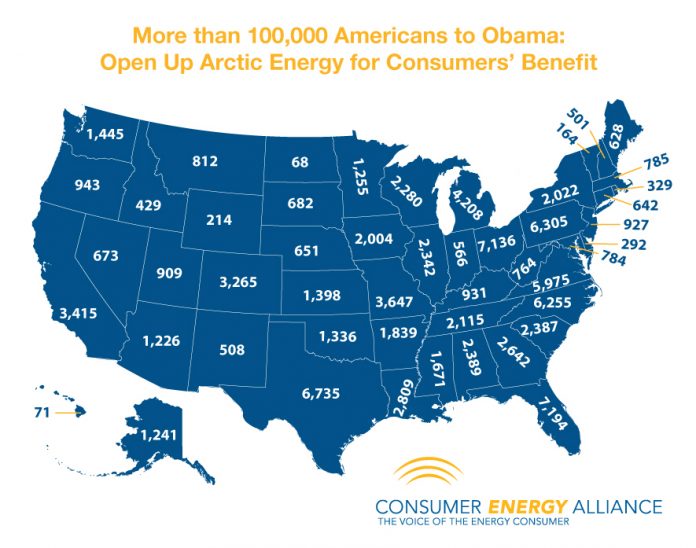 Houston, Texas – Today, more than 100,000 U.S. consumers spoke out in support of Alaskan offshore energy. Consumer Energy Alliance (CEA) and its partners have submitted these letters to the U.S. Bureau of Ocean Energy Management (BOEM) just before today’s deadline for comments on a Supplemental Environmental Impact Statement for Chukchi Lease Sale 193. Efforts to explore and produce the American Arctic’s prodigious resources may hinge on the federal government’s actions to finalize this lease sale expeditiously, which was originally held in 2008 but has been upheld by litigation pursued by anti-development groups.

American consumers support a commonsense energy policy that includes expanding access to Alaskan offshore areas where responsible exploration for oil and natural gas can be done. Polling conducted for CEA in fall 2014 found that 73 percent of Alaskans support development of Alaska’s Arctic offshore resources while a majority of residents in other states polled similarly supported Arctic exploration.

In all, 100,033 comments were garnered on behalf of CEA from residents across all 50 states. 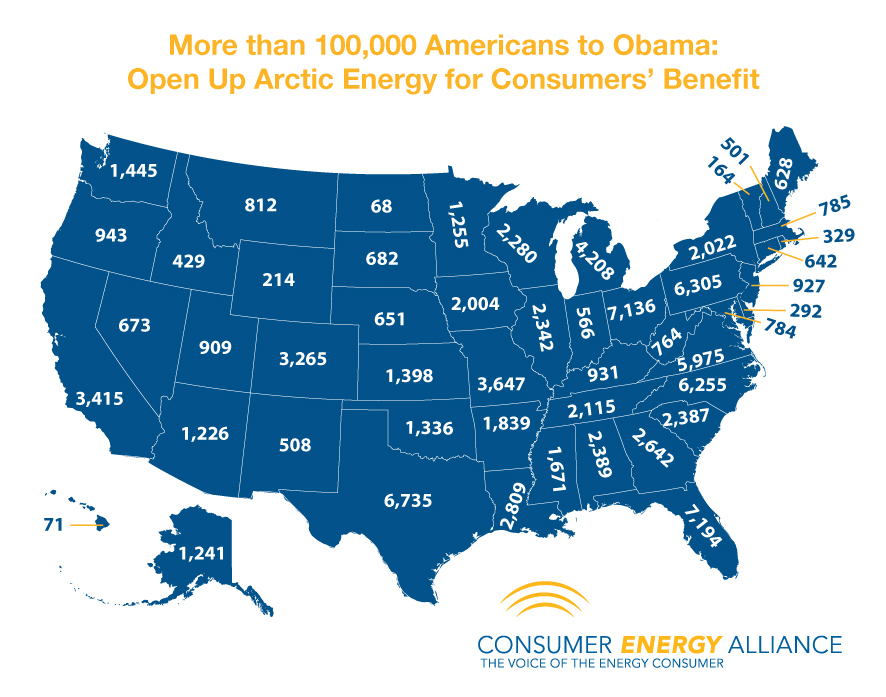 “CEA and our 250 corporate members and 400,000 individual advocates from every sector of the U.S. economy strongly value the contributions that domestic energy production has had for our nation’s consumers,” Holt says. “CEA has long advocated for expanded access to responsible offshore energy production as a means to grow our economy and lower energy prices. We urge the BOEM to listen to the more than 100,000 consumers and 50 companies and organizations that have joined CEA in calling on the federal government to move forward with Arctic energy exploration. We can protect our environment AND develop our domestic energy resources. Those who argue this is the environment versus energy production do nothing more than hurt consumers, limit jobs and stifle economic growth.”

CEA was joined in its support of Alaskan offshore development by Alaskan organizations who understand firsthand the benefits of energy development to the economy and to domestic consumers:

“Alaskans have long supported responsible, safe development of our coastal resources. For decades, Alaskan energy has boosted America’s energy security and supplied abundant resources to our fellow Americans in the Lower-48. Now is the time to ensure Alaska’s and America’s energy future by allowing Arctic exploration to proceed.”

“Off Alaska, it is vital that the United States maintain and accelerate opportunities to develop offshore oil and gas, particularly in the resource-rich Chukchi Seas. In addition to boosting U.S. economic growth, Alaskan offshore development will help extend the longevity of the Trans-Alaska Pipeline System (TAPS), helping to supply our nation’s truckers and transporters with stable sources of fuel.”

“Lease Sale 193 has undergone thorough environmental review and the BOEM has once again acknowledged that exploration can take place in the offshore waters of the Chukchi Sea with minimal environmental impact. Moving forward with exploration could lead to more than 35,000 jobs for Alaskans, new revenue for the State of Alaska and for federal taxpayers, and a new source of oil to keep the Trans-Alaska Pipeline System (TAPS) operating for the benefit of future generations.”

The Chukchi Sea, off Alaska’s northwest coast may be one of the largest untapped oil and gas sources in the entire world. According to federal estimates, development of Arctic oil resources could yield more than 500,000 barrels of oil per day for U.S. consumers, helping to offset overseas imports particularly for West Coast consumers who consume Alaskan energy.