Energy Day brings together CEA affiliates, stakeholders, policymakers, opinion leaders and the media to discuss the important energy issues of today. This year, the Sustainability Forum will feature CEA affiliates, industry stakeholders, and leading experts discussing how their respective sectors have advanced initiatives aimed at boosting energy efficiency, conservation and sustainability. The CEA Sustainability Report will be released during the forum, followed by a reception at 5 PM for all attendees and participants.

District of Columbia Office of Environment 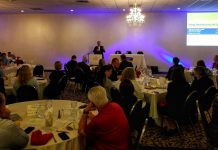