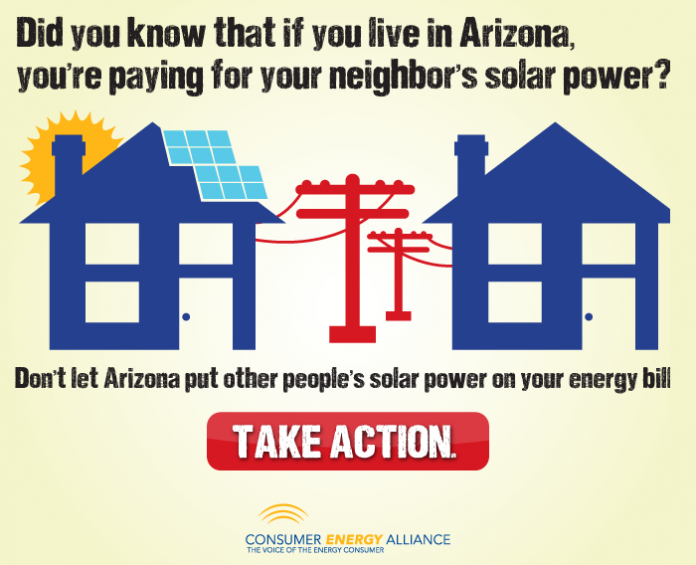 Energy consumer advocate Michael Whatley said, “Electricity rates should be fair and affordable.  While Arizona should continue to encourage solar to grow, it has to be done in a sustainable way and not disadvantage one community for the benefit of another. We are concerned that there may be too much of a spread in costs between solar and non-solar energy consumers under the current rules.  Fixing the net metering rules now will ensure that all ratepayers are treated fairly as Arizona continues to add solar capacity.”

In neighboring California, a draft report commissioned by the Public Utilities Commission found net metering would cost $1.1 billion annually by 2020.  Residential customers would have to pay $287 million of the estimated $359 million of annual costs shifted away from solar panel customers.

A Consumer Energy Alliance analysis of Arizona’s net metering rules found residents with rooftop solar panels are essentially using the electric power grid for free, forcing other customers to shoulder all of the burden of financing maintenance and upgrading the grid. Under the Arizona net metering rule, rooftop solar customers receive a credit equal to the full retail rate for the power they sell back to the local utility.  The full retail rate includes all of the fixed costs of the infrastructure that makes the electric grid safe, reliable, and able to accommodate rooftop solar panels.

The Arizona Republic reported in July about the inequity between solar and non-solar customers:

[B]ecause their [solar customers’] monthly bills are so low, they pay little of the cost of running the grid, building new transmission lines and paying for other improvements. That cost increasingly is pushed onto non-solar customers…

Consumer Energy Alliance is urging energy consumers in Arizona to visit its website at www.consumerenergyalliance.org/act to make their voices heard.   At the site, energy consumers can email the Arizona Corporation Commission and urge commissioners to update Arizona’s net metering policies to require rooftop solar customers to pay for their fair share.