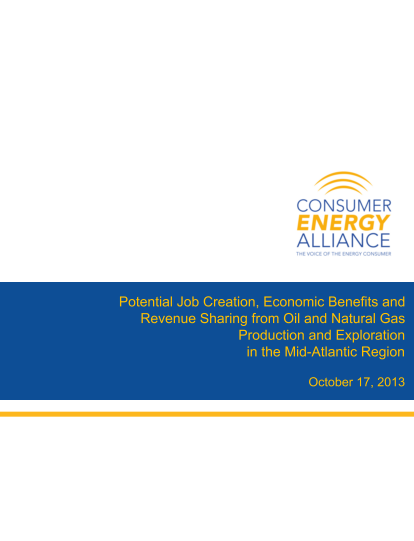 A CEA study unveiled at the Governors Conference on Energy in Richmond, VA today predicts that the federal government and state and local governments in the Mid-Atlantic states would see $13 billion in revenue generation and the creation of 10,000 jobs from opening up the Outer Continental Shelf to oil and natural gas development.

In August 2012, the Department of the Interior (DOI) finalized the Outer Continental Shelf (OCS) Oil and Gas Leasing Program for 2012-2017 that does not include any leases in the Mid-Atlantic OCS Region despite the fact that previous Five Year Plan included a lease sale in Virginia’s adjacent waters and the fact that the Obama Administration announced its intent to hold multiple MidAtlantic lease sales in 2010.

DOI will begin the process for developing a new Five Year Plan for 2017-2022 in the near future.

As potentially affected states, the input from the states in the Mid-Atlantic OCS Region –Delaware, Maryland, Virginia and North Carolina – during the development of this new Five Year Plan will play a significant role in whether Mid-Atlantic lease sales will be included in the OCS Oil and Gas Leasing Program for 2017-2022.

In deciding whether to support inclusion of Mid-Atlantic lease sales in the 2017-2022 program, state officials will need to consider the tremendous economic impacts and potential revenues that could be generated for the MidAtlantic states should offshore exploration and production take place. A recent report1 estimates that the OCS exploration and development activity in the Mid-Atlantic could:

• Add $1.935 billion annually to the Gross Domestic Product; and

In addition to the direct and economic impacts of offshore energy exploration and development, the Mid-Atlantic states may be able to receive tens of millions of dollars annually in royalty revenue-sharing receipts that would be generated by OCS exploration and production.

Under current law, all revenue (except for certain leases in the Gulf of Mexico covered by the Gulf of Mexico Energy Security Act of 2006) generated from offshore oil and gas production goes to the federal government. Some revenue is returned to the states for land and water conservation efforts and coastal impact assistance, and the rest is channeled into the federal government’s general operating budget.

However, if current laws were amended to allow the MidAtlantic states to receive the same royalty revenue-sharing treatment that is currently granted to the Gulf Coast states, these states could receive up to $1.22 billion annually from offshore exploration and production revenue-sharing receipts.

Thousands of jobs, clean domestic energy, and up to $1.22 billion per year in revenue sharing from federal receipts could flow directly into the State budgets of Delaware, Maryland, Virginia and North Carolina from offshore energy production.

1 The ICF International report can be found at http://www.api.org/newsroom/upload/access_study_final_report_12_8_08.pdf