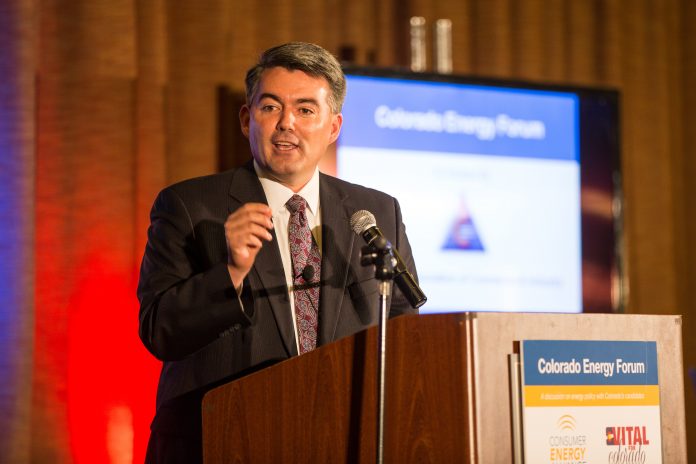 Westminster, Colo. – Candidates vying for top office in Colorado told the Colorado Energy Forum on Tuesday that its state can find sensible ways to develop its energy resources.

U.S. Sen. Mark Udall and Gov. John Hickenlooper shared the stage with their challengers, U.S. Rep. Cory Gardner and former U.S. Rep. Bob Beauprez, to lay out their vision for how Colorado’s energy consumers can benefit from natural gas, oil, and wind energy.

Event organizer Andrew Browning of Consumer Energy Alliance said the candidates’ positions should be important to voters because they are indicators of future energy policy: “The regulations we develop, the policies we implement in Colorado will have impact nationally and even internationally.”

Cory Gardner, who is challenging Mark Udall, said he backs an “all-of-the-above” energy plan but warned of overreach from federal agencies such as the EPA and the Bureau of Land Management. “Making sure that these agencies are protecting our environment, protecting our people, land, air, water, but making sure they are not strangling the ability of us to develop our resources.”

Udall gave his remarks after Gardner and echoed a similar desire for a comprehensive energy strategy, one in which renewables have an equally important role as traditional resources: “We have what I categorize as a “best-of-the-above” approach to energy. We have found newer and better ways for our abundant traditional energy sources like natural gas alongside exciting new technologies like solar, biomass and geothermal. We understand that our energy sources just don’t power our cities and our businesses at home; they drive our economy.”

Gardner and Udall are locked in a close campaign. Gardner has challenged Udall’s positions on various energy issues throughout the campaign, including recent state-wide anti-fracking initiatives that narrowly avoided the November ballot and the implications of a carbon tax in Colorado, which Udall has expressed support for. Gardneryesterday addressed Udall’s reluctance to go into detail about a potential tax: “When I asked [Udall] how much a carbon tax would cost, he refused to answer the question.”

Gov. John Hickenlooper described Colorado energy development as an example of responsible economic growth with effective environmental regulation: “We have taken on a number of the challenges around the new energy economy, and we are I think a model state in terms of ‘all-of-the-above.’ We have embraced renewable energy, wind and solar, but at the same time looked at these new technologies, the marriage between horizontal drilling and hydraulic fracturing and the consequent issues that have been raised.”

Former U.S. Rep. Bob Beauprez, Hickenlooper’s challenger, contends overreaching regulation is prohibiting Colorado from functioning as efficiently as possible. Beauprez promises to “suspend all new regulations” the first day of his term if he is elected. “Never in the history of man has a state harvested natural resources safer, cleaner, more efficiently than we can right now. We ought to be celebrating that, not punishing that.”

The event was hosted by Consumer Energy Alliance, Vital for Colorado, the Colorado Business Roundtable, and the Colorado Farm Bureau with the support of more than a dozen Colorado consumer and business organizations.