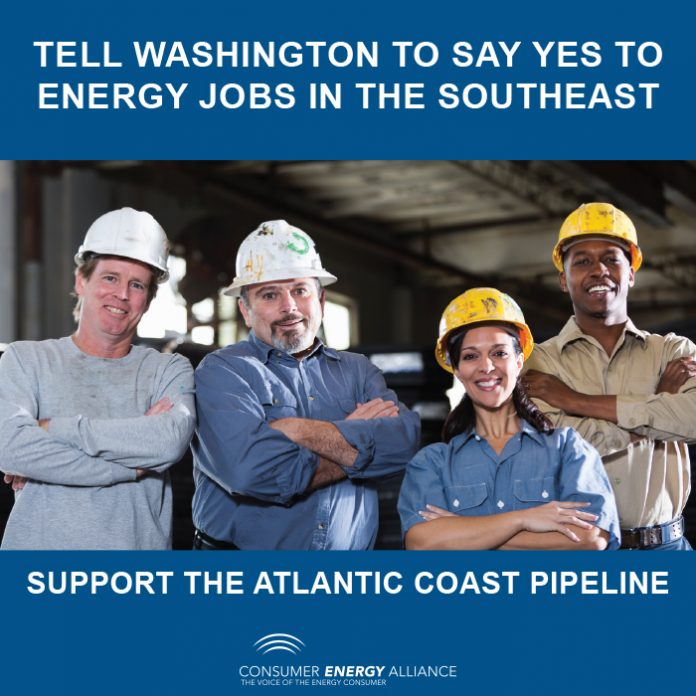 “Domestic natural gas production from the Marcellus Shale has created an engine for much-needed jobs and economic investment throughout the United States,” said Michael Whatley, Executive Vice President of Consumer Energy Alliance. “We must make the most of our newfound energy abundance by supporting key infrastructure projects like the Atlantic Coast Pipeline that will deliver natural gas to areas of the country where it is greatly needed. The construction of this single project will increase the affordability and accessibility of energy supplies to consumers in the southeast and result in a significant economic boost across a three-state region.

“With the supportive comments we submit today, combined with the thousands other Americans have previously submitted, it is clear that American consumers recognize the economic and environmental potential of responsible domestic energy development,” continued Whatley. “Consumer Energy Alliance will continue to ask for the support of these individuals as the Federal Energy Regulatory Commission moves forward with the speedy approval of the Atlantic Coast Pipeline.”

The five-year construction of the Atlantic Coast Pipeline will have an estimated economic impact of $2.7 billion that can support a total of 17,240 jobs across West Virginia, Virginia, and North Carolina. After the project is completed, ongoing operation will produce a total of $69.2 million in economic impact annually.