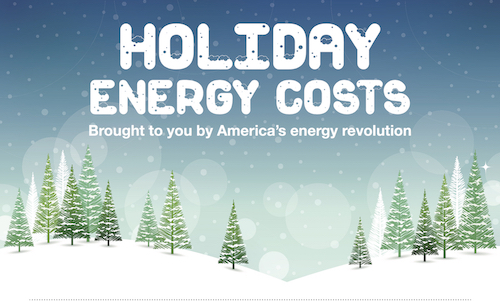 The holiday season can be one of the most enjoyable, yet expensive, times of the year.

But thanks to the U.S. energy revolution, Americans can plan on keeping a few more hard-earned dollars in their wallets heading into the new year.

That’s because consumers are paying the lowest gas prices we’ve seen in seven years. As such, more than 100 million Americans are expected to travel this holiday season, which would be a record high. An overwhelming 90 percent will travel via road, which equates to roughly 1 in 3 U.S. drivers.

According to AAA, Jan. 1 will also welcome the lowest national average for a gallon of regular gas on New Year’s Day since 2009. The average on Dec. 18 was already $2.004, and experts project that it could drop below the $2 benchmark by the end of the holidays.

Twenty-six states the week before Christmas were already reaping the rewards of a statewide average lower than $2 per gallon. The average price of gas is also down significantly in every state compared to the same time a year ago. In fact, 42 states are saving 50 cents or more per gallon.

According to Forbes, the average six-foot Christmas tree – when lit up for 12 hours per day for 40 days –will cost:

Here’s some more good news: There are several other ways that consumers can cut down on energy costs and have more money to spend on gifts for loved ones.

Here are some tips:

Here are a few tips on how to winterize your home and cut heating bills:

CEA also has a few pointers on how to save on overall energy costs:

These are just a few helpful tips that can help limit energy costs throughout the holidays and winter season. We hope you find them useful and that you and your family have a safe and happy holiday filled with low energy and fuel costs!