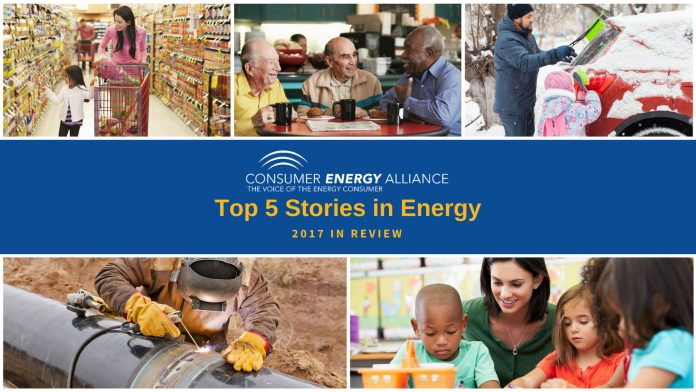 Two stalled, high-profile projects – the Keystone XL Pipeline and the Dakota Access Pipeline, rejected by the Obama administration – were green-lit by the Trump administration. While the details of the former are being worked out following Nebraska regulators’ decision to approve the project statewide via a new route, the latter is online, moving energy via the safest way known – pipelines. Appointments later in the year by the Trump administration allowed FERC to reach quorum and approve a variety of infrastructure projects previously in limbo, which’ll help transport supplies more cost-effectively for companies and consumers.

Trump’s EPA has begun rolling back the Obama-era regulation that required states to cut carbon emissions from existing coal- and gas-fired plants 30 percent below 2005 levels by 2030. The regulation was criticized for being a fiscal back-breaker for lower-income families, who need lower-cost, more-affordable energy like coal and gas to make ends meet. It was also considered a jobs killer by critics, and detrimental to the economy long term.

Oil prices spent the bulk of the year below the $50-per-barrel mark. But by August, prices exceeded the $50 threshold for the first time in several months; by November, it was over $60. Still, gas prices have remained largely steady – and the oil price recovery has helped put more industry workers back to work.

In late summer, Hurricane Harvey water-logged Houston, idled about 30 percent of the country’s refining capacity and temporarily put local and regional pipelines offline – all of which sent gas prices soaring. But that was a temporarily hiccup in an otherwise steady year in pump prices. Per AAA, in a news release before the end-of-the-year holiday rush, gas prices were just 20 cents more per gallon than the same time last year despite noticeably higher oil prices. “Pump prices don’t seem to be a deterrent for today’s travelers,” Jeanette Casselano, AAA spokesperson, remarked.

The International Energy Agency (IEA) reportedly said energy firms approved the lowest number of new drilling projects in more than 70 years – meaning a tightening of the market could unfold within the next five years, which will dangerously drive up oil and gasoline prices as demand increases. Ongoing resistance in various parts of the nation also continues to hinder efforts to expand or improve the type of infrastructure that could lower household energy costs.