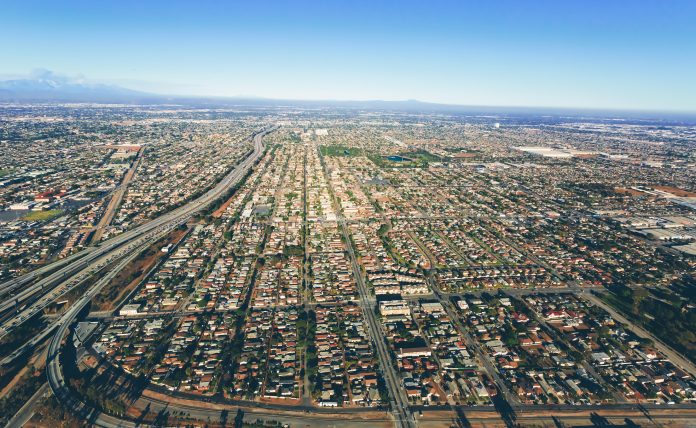 The Environmental Protection Agency (EPA) asserts that suburbanites consume more energy than the higher populated inner cities. Suburbanites must use their automobiles to commute to work or into the city or retail centers for entertainment, shopping, and school, whereas residents in urban areas can walk, ride bikes, or use public transportation. Public transportation can reduce energy use by as much as 50 percent. Suburban areas use more energy, mostly for heating and cooling, because there are more individual and single-family dwellings as opposed to more multi-family homes in densely populated areas where the smaller size and common walls reduce heating and cooling costs.

While residents in suburban areas enjoy a lifestyle free of “big city” problems, such as noise, pollution, and crime, there are still negative outcomes that should be addressed, such as greater fuel consumption due to longer commutes, larger lawns that require more water usage and bigger homes to heat and cool. And according to the Urban Land Institute’s Terwilliger Center for Housing covered in the Wall Street Journal, “suburban areas surrounding the 50 largest metropolitan areas makeup 79% of the population of those areas but accounted for 91% of population growth over the past 15 years.” That’s a huge number of people commuting from massive residential neighborhoods.

And with roughly three-quarters of people between the ages of 25-34 moving to the suburbs, new housing developments are sprouting up like weeds. Vast amounts of energy are used to build new developments. Trucks transporting building materials, power tools, and machinery are all dependent upon fuel or electricity to build new homes. Many builders and developers are trying to use what is already in place by constructing mixed-use communities where housing units sit on top of offices, shops, restaurants and large retail. These mixed-use facilities are not only a smart move, but they use less energy.

Mixed-use facilities aside, even after these large housing developments are constructed, the amount of energy consumed remains at a high. As stated before, homes found in the suburbs are generally larger than those in the city, with the average single-family home in the U.S. measuring up to roughly 2,457 square feet. That’s a lot of space – making it harder to regulate temperature. It also takes more electricity to power suburban amenities such as TVs and appliances. Don’t forget taking the kids to ballet and soccer practice also requires a drive across town, adding up a family’s energy consumption. Multiply all that consumption with the number of people in your city, not to mention other communities and the state, and that adds up.

In fact, greenhouse gas emissions in suburban areas account for more than double the national average, whereas densely populated urban areas use less than half the national average. Reducing carbon emissions is not an easy fix. The area of the country in which you live largely determines the type of emissions expended. Densely populated suburbs, for example, emit more greenhouse gases; and these higher incomes of suburbanites equate to more goods consumed, such as cars, lawn mowers, motor homes, and other such items. But combining energy-efficient technologies, smart home products, and smaller more fuel efficient cars, make a significant impact on the environment. Americans can also work to reduce their carbon footprint by recycling and using dishwashers and washing machines efficiently – or purchasing new ones that can help save not only money but time.

The suburbs are continuing to see high rates of new residents, and the decision for young individuals and families to move to the suburbs is growing. With this growth trend, there are a few outcomes including higher energy consumption rates as well as higher greenhouse gases. This is a trend that does not seem to be coming to an end. As individuals move farther out of the city into more space, it is important to find ways to become more energy efficient including carpooling to work or walking to drop the kids at after-school activities rather than driving.

So before rash decisions are made on energy – like shutting down all pipelines, or halting a specific type of energy development – consider how you really use energy in your daily life and how you can save with solutions that that think through what we all use. Much of that starts with conservation and efficiency, but in the meantime, let’s continue to work together and make energy a topic for rational discussion.