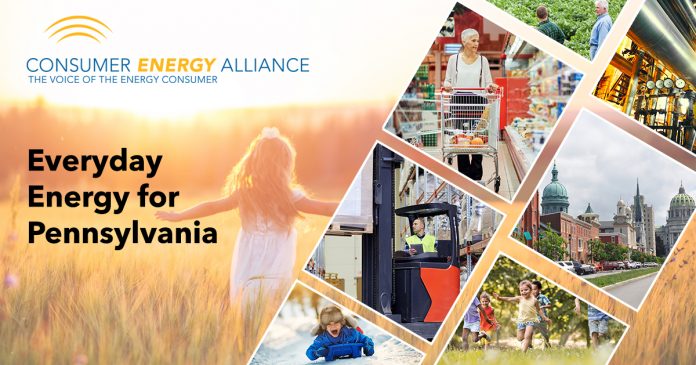 PITTSBURGH, P.A.  — Thanks to increased production and new technologies, which have decreased the price of natural gas, Pennsylvanians saved more than $30.5 billion between 2006 and 2016, according to a new state report released today by Consumer Energy Alliance (CEA) with calculations developed by Orion Strategies.

Residential users alone saved almost $13.3 billion, while commercial and industrial users saved upwards of $17.2 billion, the report, titled “Everyday Energy for Pennsylvania,” said. The analysis examined how the shale revolution across the Marcellus region has provided benefits to the Keystone State’s end-use energy consumers by boosting disposable income and economic investment, as well as revitalizing communities.

CEA’s report examines the benefits of Pennsylvania’s energy production and its role in providing reliable and affordable energy that keeps the lives and the businesses of Pennsylvania moving. CEA continues to strongly support the development of natural gas and other traditional and alternative energy sources while urging policymakers to support the state’s homegrown energy production to ensure Pennsylvania’s hard-working families, seniors, households, and small businesses can continue to enjoy the benefits that low prices are bringing to communities.

“This report highlights the benefits Pennsylvania’s communities are receiving as a result of the state’s role in the U.S. energy revolution and investment in our state’s energy infrastructure,” said Mike Butler, CEA’s Mid-Atlantic Executive Director. “From the small family farms sprinkled across rural Western Pennsylvania to the sprawling urban industrial areas of Philadelphia and Pittsburgh, lower fuel prices have helped Pennsylvanians save over $30 billion in the past decade. While it is easy to take many of these benefits for granted, it is important to remember that each of us has a stake in making sure we meet our energy needs.”

Butler added, “Fortunately, the benefits from the increased production of Pennsylvania’s energy resources are not just limited to residential consumer savings, energy development has also led to the increase in economic investment and job creation we’ve seen over the past decade.”

“Despite the tremendous benefits and critical importance of energy production to Pennsylvanians, the future of Pennsylvania’s energy is threatened by out-of-state activists, some funded by foreign governments, who continue working to eliminate the production of safe, affordable sources of energy without offering any solutions that will help meet consumer demand while also supporting our environmental goals. CEA strongly encourages all of Pennsylvania’s elected leaders to embrace the benefits and growth potential that all energy production, especially natural gas, brings to families, farms, and factories throughout the Keystone State.”