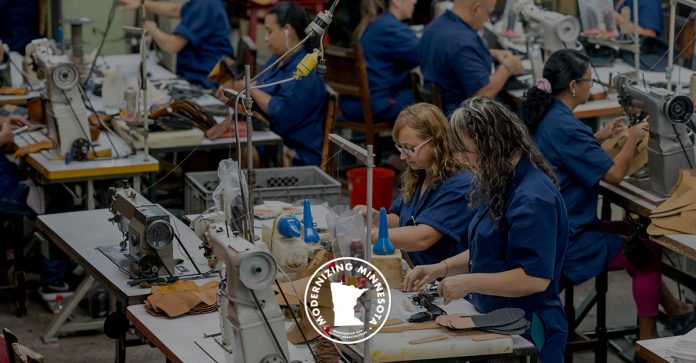 The fact that so much of our country’s supply chain exists in places with interests hostile ours is one of the biggest impediments to getting the 30 million Americans who are receiving unemployment benefits back to work. The nuts and bolts that hold the U.S. economy together can no longer be found in towns and cities that were made to build. That’s because from sheet metal for air conditioners and furnaces to shoelaces for designer sneakers, much of what we use in the economy happens to be made in other countries. Even oil is shipped in from hostile countries like Venezuela in order to pacify anti-energy groups whose goal is to abolish pipelines no matter the costs and consequences—and they’re both considerable.

You may be wondering, “What this has to do with vacationing in Minnesota?” Keep reading, please.

Unfortunately, among those Americans who have been hit hardest by the coronavirus pandemic are those who live in what is sometimes referred to as the “sweet spot.” These are solidly middle-class working families that stay ahead of the bills and aren’t living on the verge of bankruptcy—at least not yet. But the pandemic means business: For many people in this category, there isn’t a lot of wiggle room for emergencies.

Which begs the question: Why have we not taken advantage of the opportunity to put thousands of people back to work on construction projects? In addition to meeting demand for new and improved infrastructure, these jobs pay well and are performed for the most part in the most ventilated space known to humankind—the great outdoors.

Why would we not take advantage of the opportunity to put people to work on projects that will benefit everyone in the long run? Here’s a hint: It’s one of the three big topics you’re supposed to avoid in polite conversation.

The Politics of Pipelines

There are several crude oil pipelines that cross Minnesota. Line 3 is one of them. Like nearly all infrastructure that was built sixty years ago, Line 3 is showing its age. To account for this and continue to operate safely, Line 3 has limited the amount of fuel it transports—wisely—to 390,000 barrels per day. The part of this story that is not wise is the current administration’s refusal to move forward with modernizing Line 3 to use pipe that is not only new and state-of-the-art but has a larger diameter, which would double the current carrying capacity to 790,000 barrels per day to meet market demand. Still, this would only supply a fraction of the energy needs of Minnesotans. Put into perspective, Minnesotans would need 2.3 days of oil from Line 3 just to fill up all of its registered, non-electric passenger vehicles.

The opposition to upgrading Line 3 is based largely on environmental concerns. Primarily, the fear of oil spills, which are bad for the air, water, and land wherever they occur. While this concern is understandable, it is also 99.999% unlikely. If facts are what we need and want, a pipeline is one of the most environmentally responsible ways to deliver energy we have.

What’s not understandable is to ignore the fact that upgrading the line will not only create jobs but will also dramatically reduce the chances of incidents along a pipeline that’s more than half a century old. Unbelievably, improving safety is something that environmental organizations routinely leave out of their argument.

As of August 20, 2020, over 326,000 Minnesotans are still unemployed. While moving forward with modernizing Line 3 would not put all of them back to work, it would be a step in the right direction.

Putting Minnesotans to work to modernize Line 3 to meet the demands of the community while dramatically reducing the risks is a clear way to move our state in the right direction. Closely related to the jobs that would help construct the new pipeline would be hiring workers to deactivate or remove the old pipeline once the modernization is completed. After modernization, additional jobs are created that help operate and maintain the line.

Less clear – but equally important – to the transportation of crude oil through Line 3 are the refineries that benefit from receiving the fuel. You see, there are four different types of crude and each is made up of many different types of “products.” The job of the refineries is to do just what their name implies. Refine. They do this by turning crude oil into something that can be used to fuel a car or an aircraft but also to make products or heat a home. Doubling the amount of crude oil a pipeline such as Line 3 can accommodate would doubtlessly create the fuel products we need, but it would also have a positive impact on employment opportunities at these refineries.

Another benefit of upgrading the pipeline is that it would prevent the cost of energy from skyrocketing – especially gas prices. That’s what happens when energy, for various reasons, needs to be imported by means other than pipelines, which are almost always more expensive, and often less safe. Ironically, since alternative means of transport are often the result of environmental activism, moving oil across the country or around the world by rail and sea increases the risk of potentially devastating spills.

Right next door in North Dakota, rail cars have been used to ship oil across the state because of the lack of pipelines to get fuel out. Pipelines ultimately transport that oil in a safer, more efficient way. In the end, the added costs of railroad shipping are passed to consumers.

Costs can also be passed on to consumers that you might never have expected and should be cautionary tales to policymakers. As hinted at earlier, prior to having adequate pipeline infrastructure in North Dakota, rail transportation was necessary to move oil to refineries. The downside is that by clogging the railways with oil shipments, farmers in North Dakota and Minnesota weren’t able to ship the food they’d grown in a timely matter or for a fair price. That means food was left to rot if farmers could not afford the increased price of transporting their crops. It also means that thanks to the law of supply and demand, what little food does make it to market ends up costing more than it would have otherwise.

On a different note, Massachusetts is another great example of good intentions gone horribly awry. Due to the opposition of transporting oil via pipelines in the Northeast, Massachusetts has received needed oil supplies through imports from Russia in massive oil tankers. These ships navigate through the Arctic or across large swaths of ocean from a country hardly known for its environmental advocacy. And often, even if the energy hasn’t come from Russia, the state has had to pay spot market rates for its energy to meet local demand. Not surprisingly, Massachusetts has earned its place in the ten states with the highest energy costs.

As you can see, cutting off pipelines didn’t decrease demand, it’s just made it more expensive to get it from elsewhere.

Finally, let’s get back to vacationing in Minnesota. More often than not, people who have jobs are generally people who go on vacation, and in Minnesota, as in life, vacations tend to revolve around water. The state has so many lakes they’re on the license plate, and spending time in communities that are near those lakes is a rite of passage for many.

But when people aren’t working, they’re not supporting communities, their own or those they visit. They aren’t eating out or buying new shoes for their kids. And they’re certainly are not fishing, boating, swimming or even just relaxing with a great book in one of their favorite lake communities that depend on tourism. And those communities, unnecessarily, take a blow not just to their budgets, but to their spirt and their soul.