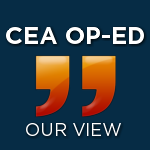 The following op-ed from David Holt, President of Consumer Energy Alliance, appeared on the National Journal website here, in response to the discussion question “Natural Gas: A Fracking Mess?” on September 20, 2010.

The innovative use of both hydraulic fracturing and horizontal drilling have expanded and deepened both the geology and geography of U.S. natural gas supply by tapping into unconventional gas deposits previously thought unattainable.

EPA’s study is one important policy step to provide information and data necessary for sound decision-making both by the EPA and Congress on the use of hydraulic fracturing for production of shale gas. Congress and EPA should await the study’s results before rushing into long term decisions about how this technology should be regulated. It is also important to consider all aspects of how best to regulate hydraulic fracturing with the dual goals of protecting groundwater resources while realizing the full potential of this resource “game-changer.”

For instance, since shale formations differ between geographies, state regulatory agencies are perhaps better attuned to the unique features of the shale formations in their respective areas and how best to balance natural gas production with protecting groundwater resources. Applying a uniform or federally regulated “one size fits all” approach to all areas of natural gas shale production in the United States would fail to account for these variations and could actually stifle development of this increasingly important domestic resource.

Additionally, while continued expansion of the technology could spur massive job creation in the U.S., it also presents new opportunities for America’s oil and gas producers and service companies abroad. U.S. companies are currently exporting this technology and working with energy firms in China, India and Western Europe to help them realize their potential to reduce energy imports and meet climate goals through their own domestic development of this less carbon-intensive fuel. This also reduces the market power of OPEC and Russia.

Development of domestic, long-term, large natural gas reserves could and should play an important role in the state of a future U.S. economy that has a lower carbon profile and is less dependent on imported forms of energy. U.S. manufacturing and other natural gas-based industries could and should grow again with a comprehensive energy policy and an appropriate regulatory policy on natural gas that is focused on keeping the U.S. globally competitive.

The world is watching how the U.S. approaches production of these new unconventional natural gas reserves. As we await the EPA report, the continued exploration of this technology is prudent to our national interests.