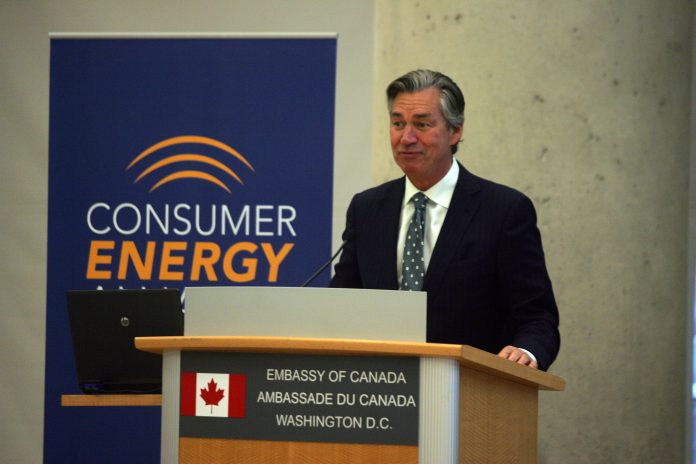 “We have won the lottery we just have to figure out a strategy to cash the ticket,” said Gary Doer, Canada’s ambassador to the United States, in remarks to the North American Energy Security Dialogues that took place at the Embassy of Canada in Washington, DC on Wednesday.

For the first time in the forty years since OPEC oil embargo Doer says energy self sufficiency for North America is “within our grasp.”  Doer outlined an energy plan that includes energy efficiency, such as improved automobile fuel efficiency standards adopted by both countries, as well as developing new sources of renewable energy, natural gas and oil.

Similar to Keystone XL, there is increasing opposition to the citing of transmission lines that deliver renewable energy to market, “There is one lawyer per megawatt to get a transmission line approved,” Doer quipped.

Renewable energy means generating power through hydro-power, wind, solar and geothermal along side traditional energy sources, but none of the sources matter unless the infrastructure is in place Doer says.  “We need stop talking about it and do it.”

The ambassador made a tongue and cheek reference to the five year delay in the United States approving construction for the Keystone XL pipeline,

“I didn’t think we would have this much controversy going from seventy-five to seventy-six pipelines, but I digress.”

But, Doer did express confidence that the U.S. State Department, which is in its fifth year of reviewing the Keystone XL pipeline, understands its completion is in line with a North American energy plan.  Doer contents with approval of Keystone XL, the U.S. will displace crude oil imports from Venezuela and lower its dependence on the Middle East.

“A lot of Americans don’t know the pipeline includes oil from middle America as well as from Alberta.”  At the end of the day Keystone XL becomes a choice.  Middle America or the Middle East.