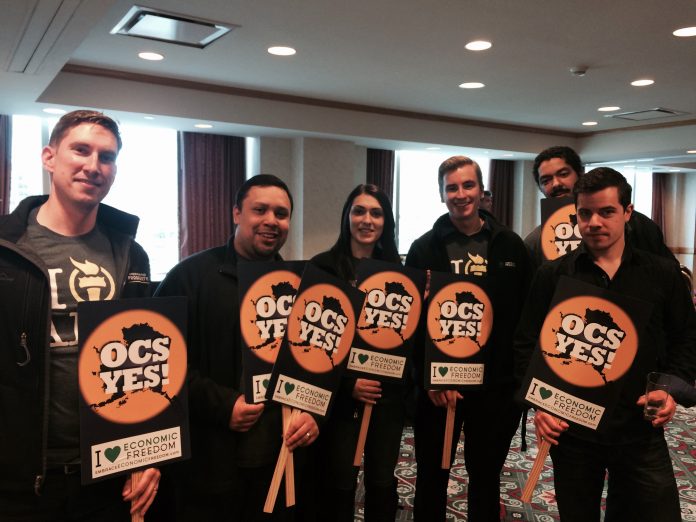 In front a crowd of supporters holding up signs that read “OCS YES!”, energy consumers, producers, and business leaders from across Alaska came together to express their support for more Alaskan offshore energy production at a press conference hosted by Consumer Energy Alliance-Alaska on Monday, March 2, just prior to an Interior Department meeting in Anchorage. 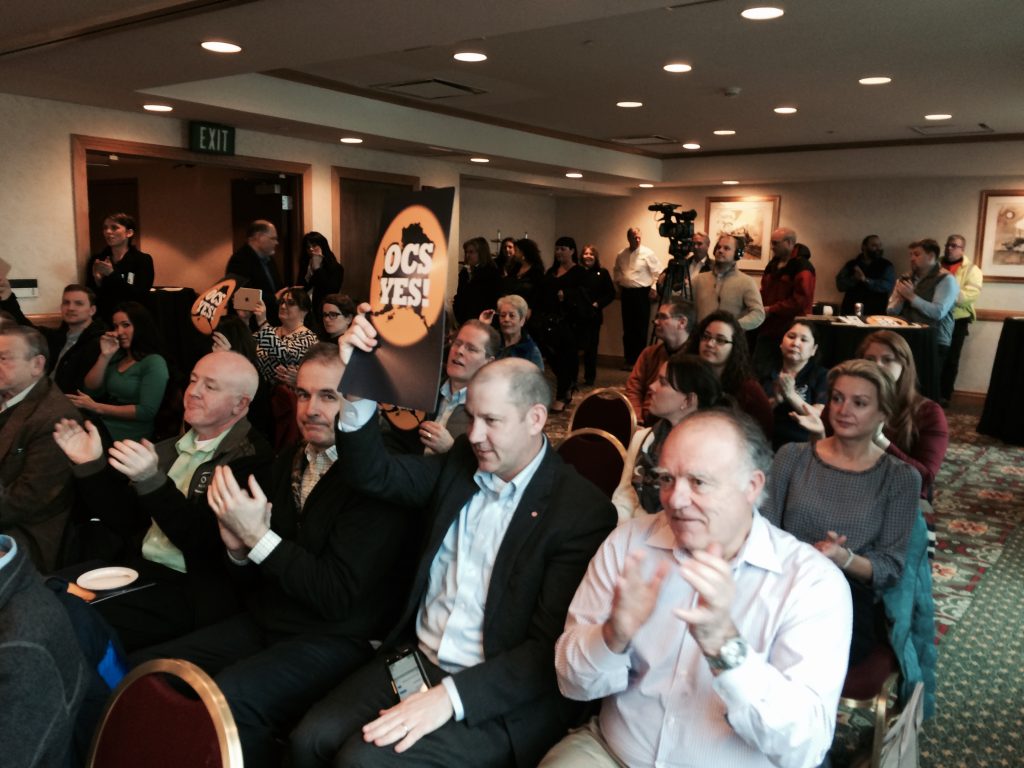 “Alaska is key to American energy self-sufficiency and lower-48 states need the energy that Alaska can provide,” said David Holt, president of the Consumer Energy Alliance. “This goes far beyond energy companies. The pocketbooks of American consumers and the balance sheets of American small businesses are at stake. Alaskan energy production is critical to the American energy economy.” 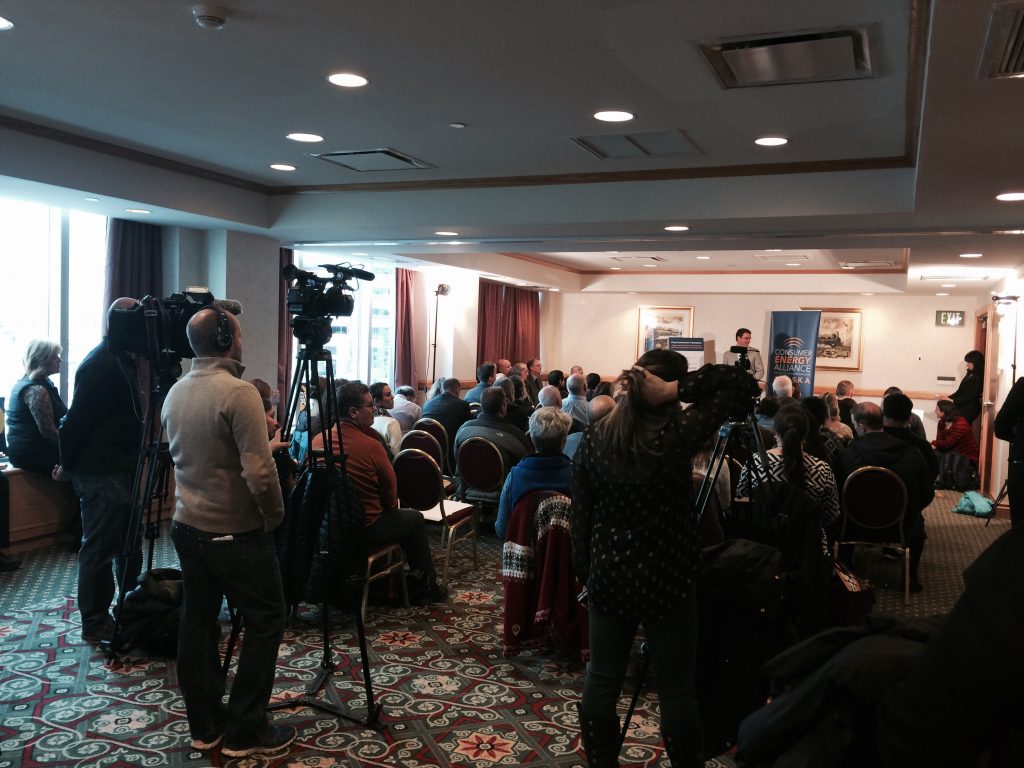 The proposal currently includes three sales off Alaska – one in the Beaufort Sea, one in the Chukchi Sea and one in Cook Inlet. However, it also restrictsleasing in a number of oil-rich areas throughout the U.S. Arctic – all of which would boost both energy and economic development throughout Alaska and the U.S., said Anne Seneca, executive director of CEA- Alaska.

“Alaskans want to help contribute to responsible American energy production, and we have so much to provide,” Seneca said. “The majority of Alaskan consumers who support offshore development are frustrated that there continues to be impediments to development.”

Numerous other Alaskan industry groups joined CEA-Alaska in urging the federal government to allow current and future lessees to explore and develop abundant Arctic resources. This included the Alaska Chamber, the Resource Development Council, and the Alaska Trucking Association.

“The five-year plan coming up, to me, is woefully inadequate,” former Lt. Gov. Mead Treadwell said at the event, the Alaska News Dispatch reported.

Here’s why: According to Aves Thompson, the executive director of the Alaska Trucking Association, the Arctic OCS, specifically the Beaufort and Chukchi seas, contains an estimated 23.6 billion barrels of oil and 104 trillion cubic feet of natural gas, the development of which would produce 54,000 jobs and $193 billion in federal revenue.

“Those numbers are staggering,” he said.

But the current plan only allows for limited development.

Alaska AFL-CIO President Vince Beltrami also spoke at the event, which was held at the Anchorage Marriott Downtown.

“I got two little grandsons and I’m looking at them, hoping that when they’re old enough to get into the workforce that OCS is going to be cranking along and that we’re going to be having jobs to put them to work, to earn money, to raise their families,” Beltrami said, according to Alaska Public Media. 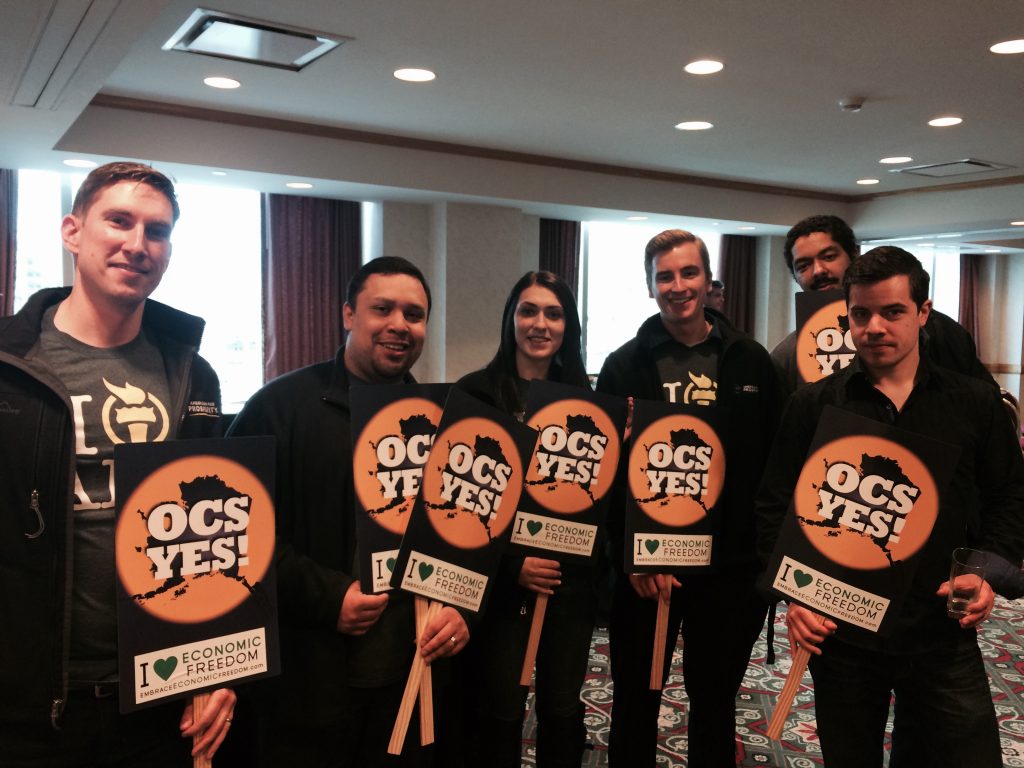 Increasing offshore development in the Arctic OCS would help extend the longevity of the Trans-Alaska Pipeline System (TAPS), said Rick Rogers, executive director of the Resource Development Council of Alaska.

“TAPS, which is operating at one-fourth capacity, is the economic lifeblood of Alaska’s economy and a critical link to the nation’s long-term energy security,” Rogers said. “Since 1971, 84 wells have been drilled in the Arctic OCS – all without incident. The Arctic OCS can be explored and developed responsibly, and it is in the national interest to proceed with an aggressive leasing schedule.”

Carl Portman, the deputy director of the Resource Development Council for Alaska, added that the federal government’s decision to ban development in the Arctic National Wildlife Refuge (ANWR) and in 10 million acres of offshore areas came at a time “when Alaskans are facing a multibillion dollar deficit due to low oil prices and low production.”

Opening up more avenues for onshore and offshore development in Alaska and its encompassing Arctic region would help the state reverse course, Portman added.

“With this enormous resource potential, the Alaska OCS likely contains enough oil to at least double TAPS throughput, extend the longevity of the pipeline, and sustain Alaska’s economy for decades,” he said.