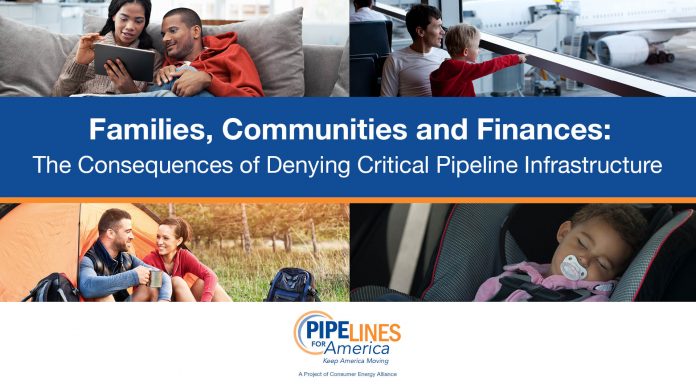 The report, titled “Families, Communities and Finances: The Consequences of Denying Critical Pipeline Infrastructure,” found that by 2030, 31 percent of U.S. electricity generation capacity would be removed should the rejection of pipeline infrastructure projects continue at its current pace and if baseload generation options go offline unnecessarily. This would threaten the delivery of vital oil and natural gas feedstock to power generation facilities and sacrifice the reliability of the electric grid. Because natural gas is increasingly used to create electricity, pipeline expansion is more critical than ever. Without more pipelines, natural gas – as well as oil for fuel and power – will not get to market. 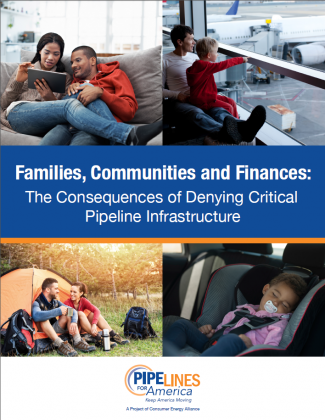 The losses from this rejected infrastructure would equal the power generation of a dozen states (or 1,450.25 gigawatts). Since one gigawatt powers roughly 750,000 homes, that’s equal to the power generation needs of California, Florida, New York, Texas, Ohio and all of New England combined.

This projected shortfall would create more economic hardship via skyrocketing electric rates for industrial, commercial and residential users, particularly the 43 million people living on a fixed income or below the poverty line who lean on daily access to affordable energy supplies. Denying pipeline expansion will further increase pressure on households facing energy poverty; approving projects will help relieve financial constraints by delivering resources more cost-effectively.
Furthermore, these scenarios would negatively impact jobs in manufacturing, energy, transportation, mining, agriculture and other industries, the report says. Corresponding impacts would include competitive disadvantages for U.S. businesses and a minimum loss of $15.38 billion in private capital expenditures and economic development.

Electricity, transportation and utility costs would also climb, the report says, as well as increase the cost of virtually every U.S.-made good and service. Fewer pipelines also decreases their statistically proven environmental benefits and jeopardizes U.S. national security and geopolitical influence, according to the assessment.

The report also revealed that the rejection of natural gas and oil pipeline infrastructure would endanger our nation’s energy security by abandoning more than 3.17 million barrels of oil per day – nearly the same amount the U.S. imported daily from OPEC and Russia, in 2015.

“Denying America the critical energy infrastructure it sorely needs, and prematurely shutting off baseload electricity generation starts an adverse domino effect that hurts America, its families, its small businesses and its agriculture, manufacturing and transportation sectors,” CEA President David Holt said. “It would derail the American energy revolution and increase our reliance on imports from foreign nations. Real energy security is not just the presence of abundant natural resources – it is also the ability to readily access and deliver those resources at an affordable price.”

The report also broke down its conclusions by regions:

The report is part of CEA’s “Pipelines for America” campaign, which focuses on educating families, businesses and political leaders about the economic and environmental benefits of pipeline infrastructure. The report examined the effects on supply by 2030 from either the failure to permit and construct new pipelines or the inability to obtain necessary permits to approve and maintain natural gas and other fossil fuel-fire electricity generation power, comparing its findings with supply and demand data from the EIA.