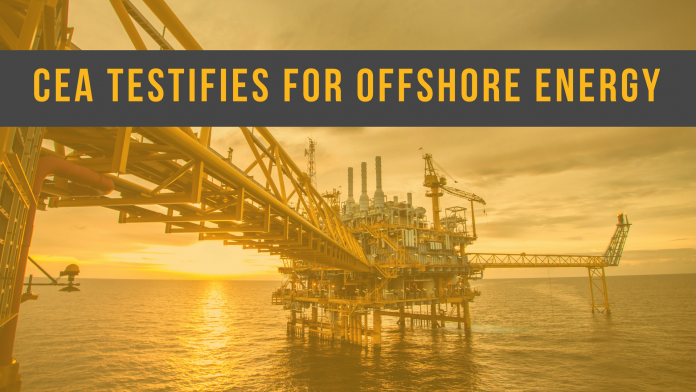 Chairman Gosar, Ranking Member Lowenthal, and Members of the Subcommittee, it is an honor to be here today on behalf of Consumer Energy Alliance to testify on developments surrounding offshore oil and natural gas development in America’s federal waters.

Consumer Energy Alliance is a nationwide non-profit, non-partisan trade association which represents families and businesses in advocating for balanced policies that support access to affordable, reliable energy.  CEA’s membership includes over 275 affiliate members that represent nearly every sector of the U.S. economy and more than 450,000 individuals across the country dedicated to developing and implementing energy policies which will promote affordable and reliable energy.

The Need for Expanded OCS Leasing

The federal government forecasts that energy consumption will continue to rise in the coming decades, with petroleum and natural gas comprising more of the nation’s energy consumption portfolio in 2040 than it did in 2016, [1] making it vital for the federal government to promote opportunities to develop America’s natural resources in order to secure long-term affordable, reliable energy.

In addition to providing tens of thousands of high-paying jobs and adding billions of dollars to the American economy, domestic offshore oil and natural gas production have helped keep gasoline, diesel, and jet fuel prices affordable and greatly enhanced our national energy security.  Over the past 10 years, CEA has worked with the Bush and Obama Administrations, as well as dozens of governors, hundreds of state legislators and stakeholders and hundreds of thousands of individual energy consumers to support expanded leasing in the Gulf of Mexico, Alaska and Atlantic OCS regions.

As a resident of North Carolina, the benefits of potential Atlantic development are important to me.  According to a recent Quest Offshore Resources study, for North Carolina alone, Atlantic energy development could create more than 55,000 jobs, add more than $4 billion annually to the state’s economy, and cumulatively generate over $26 billion in spending and nearly $4 billion in new state revenue.[2]

Underscoring the need for an adequate supply of affordable energy, Inside Energy notes that while economists consider “affordable” energy to equate to 6% of income, households in North Carolina, South Carolina, and Georgia with incomes below 50% of the federal poverty level spend about 30-40% of their income on energy, while such households in Virginia spend roughly 40-50% of their income on energy.[4]

Furthermore, the study found that Atlantic development could generate an additional 1.3 million barrels of oil equivalent per day.  That is enough to replace nearly two-thirds of the 2.1 million barrels of crude oil and petroleum products that we import daily from the Persian Gulf.[5]

Access to the 404 trillion cubic feet of natural gas and 90 billion barrels of oil projected to sit in the Outer Continental Shelf will ensure a stable, steady supply of energy for American energy consumers with reduced reliance on imports from hostile overseas regimes.  It will also keep prices of gasoline, diesel, and jet fuel affordable – which is critical to every segment of the U.S. economy.

In terms of American energy security, it is important to note that the United States military – the single largest energy user in the world – heavily relies on oil, bunker fuel, and jet fuel to protect our interests around the world. In Fiscal Year 2014, the Department of Defense used over 87 million barrels of fuel, at a cost of nearly $14 billion.[10] With oil hovering around $100 per barrel less than 2008 prices, we are saving around $8.7 billion per year in fuel costs – which can now be spent on body armor, new weapons systems or other critical programs.  Increased domestic production can also provide U.S. allies with energy supplies, in turn reducing their dependence on hostile regimes.

It is very important that offshore energy development is safe – and is getting safer every day.  Growing up, I spent a lot of time with my family on the beaches of Nags Head, Kitty Hawk, and Topsail Island, NC. Now, I take my children on vacations to the beach every year. It is important to me – as it is to all of the residents and vacationers who visit the Atlantic beaches every year – that the industry and the federal government will work together to ensure that any exploration and development of offshore energy resources is done without harming these national treasures.

Both the federal government and the offshore energy industry have made great strides in improving all aspects of offshore energy production. Among these changes are the creation of new collaborative containment companies which stand ready to deploy state of the art containment technology at the first sign of any wellhead spill, the development of more than 600 industry standards covering all aspects of production and the creation of the Center for Offshore Safety, which works with independent third-party auditors and government regulators to create an industry-wide culture of continuous safety improvement.

More than 40,000 wells have been safely drilled in the Gulf of Mexico and more than 700 are operating at depths of more than 5,000 feet. This record and the fact that 99.999% of all oil produced, transported and refined in the United States reaches its destination safely are important points for Congress and the Trump Administration to consider when anti-development activists claim that the industry cannot operate safely or that a major spill is inevitable.

Moreover, these accomplishments have occurred while the country has been making environmental strides, with net U.S. greenhouse gas emissions in 2015 being 11.5% lower than they were in 2005,[11] and as President Obama noted last year, at a time when the country has “reduced the pace at which we are emitting carbon dioxide into the atmosphere faster than any other advanced nation.”[12]  This underscores the fact that American energy development and a healthy environment go hand-in-hand.

The development of a new leasing program for 2019-2024 presents an opportunity to expand OCS leasing in the Arctic, the Gulf of Mexico and the Atlantic.  To be sure, this is a long process.  Assuming that these areas are ultimately included in the new program, additional environmental and public reviews, federal approvals, and business determinations will have to occur before any actual on-the-water activity takes place.  Given the long lead-times associated with development in new OCS regions, actual production would be unlikely to take place before the mid-2030s.

This important and comprehensive process provides ample opportunity to ensure that all issues and concerns are fully coordinated and addressed.  At the same time, the fact that the process takes such a long time underscores why it is imperative for the Department of the Interior to take steps today to make sure that ample opportunities are available to meet our energy needs well into the future.