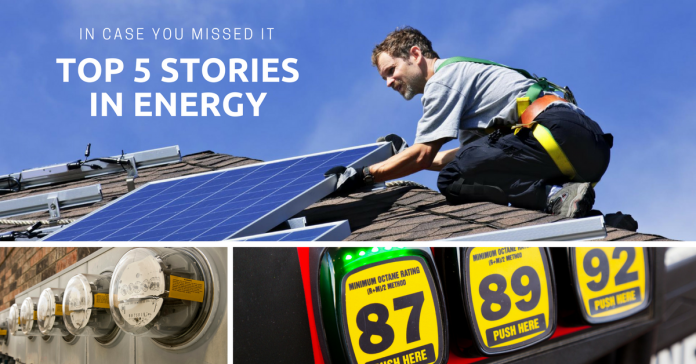 In case you missed it, here were the top five stories we found interesting last week.

After more than six months of diminishing returns, Wall Street analysts who follow the energy sector are seeing improvements in an exchange-traded fund that serves as a benchmark index for the financial performance of energy stocks and key commodities such as crude oil. The SPDR Energy Select Sector, which trades under the symbol XLE, experienced a two-day gain of 1.7 percent that represents the first break of a downtrend line since December. This minor victory is encouraging investors who are also noticing a rebound in crude oil prices. As a result, analysts believe that oil producers and utilities may bump up consumer prices in the near future as they try to replenish the cash reserves.

After experiencing a hike in the wake of the Fourth of July holiday, gasoline and diesel prices at American gas stations were mostly steady towards the end of the month. The lowest prices in the nation could be found in South Carolina; however, drivers in certain parts of California paid closer to $3.00 per gallon. Whereas the national gasoline price average stood at $2.24 per gallon, stations in Modesto were charging $2.78, which is $0.04 higher than last year. OPEC officials were scheduled to meet in late July to discuss ways to support crude oil prices at a time when the U.S. dominates natural gas production.

3Electricity Rates in Hawaii Could Climb by 44 Percent

Energy and utility regulators in the Aloha State have approved a proposal by the Hawaiian Electric Companies to transform the islands’ power grid so that it runs on 100 percent renewable energy by 2030, but this will result in a 44 percent increase in electricity rates for households. Renewable energy projects tend to be very expensive in the beginning and do not level off until several years later, which explains why Hawaiians will be subject to high rates for the time being. Under the current proposal, the big island of Oahu will stop burning coal for electrical generation by 2022.

The first megawatt of electricity generated by solar energy was recently delivered across the Wolverine State thanks to a special financing initiative approved in 2009. Michigan Saves is a project enacted by the Public Service Commission for the purpose of providing start-up cash to homeowners and businesses that wish to install solar panels. To this day, the project has funded 132 residential and nine commercial installations, which add up to one megawatt. Homeowners and business managers who would like to get financing from the Michigan Saves program should contact their local Public Service Commission, representatives.

In Australia, a tech startup challenge could launch a new trend of allowing families to not only reduce their residential power consumption but also sell their excess energy for profit. The concept of managing the demand for unused electricity is called “negawatt,” and it essentially consists of providing financial incentives to households and businesses that consume less electricity and heating than average. For example, a small cafe that decides to install skylights and to cook with propane could receive compensation for placing less demand on the power grid during business hours.