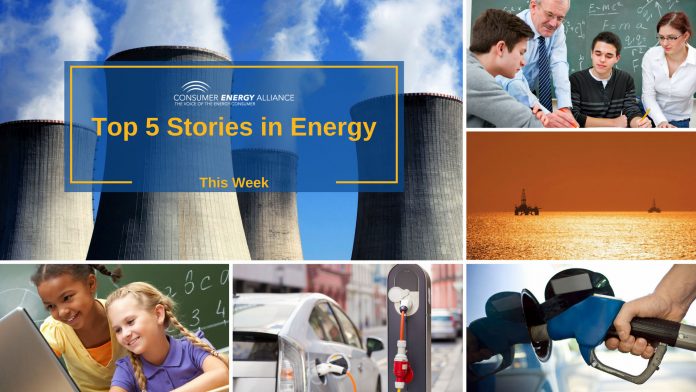 5Low Gasoline Prices in the U.S. May Soon Come to an End (via Wall Street Journal)

In mid-December, drivers across the country were pleased to see gasoline prices about five cents lower than at the beginning of the holiday season; this situation was expected by oil industry analysts who believed that Americans would enjoy a couple of months of lower fuel prices, but this may no longer be the case. According to a report published by The Wall Street Journal, a crude oil pipeline disruption in the North Sea has pushed futures trading upwards by 0.5 percent, and this accident could result in higher gasoline prices in early January, which would be much sooner than expected.

This week, New Jersey joined a growing list of states like Connecticut, Illinois, New York, Ohio and Pennsylvania with lawmakers exploring legislation to prevent nuclear power plants from being shuttered prematurely.  Nuclear accounts for almost half of the electricity generated in New Jersey.

Oil and gas development continues to support the finances of schools, public safety forces, and vital community services across the country.  Just this week, new numbers from West Virginia estimate that communities received over $96 million from property taxes alone.

Toyota is known as the company that introduced hybrid cars to the American market with the Prius a few years ago, but the Japanese automaker has fallen behind the competitive curve with regard to electric vehicles. After unsuccessfully trying to introduce hydrogen-powered models such as the Mirai, the company is now investing heavily in Panasonic’s battery division so that it can catch up to American companies such as Tesla, GM and Ford, which are taking the lead in the plug-in electric vehicle sector.

1Trump to Open the Door for Oil Drilling Off U.S.’s East Coast (via Bloomberg)

Energy consumers – from families to farmers and small businesses to manufacturers – may continue to see additional downward pressure applied to energy prices.  The Trump administration is preparing to unveil an expansive offshore oil plan that would open the door to selling new drilling rights in Atlantic waters, providing increased revenue and job opportunities to coastal states.