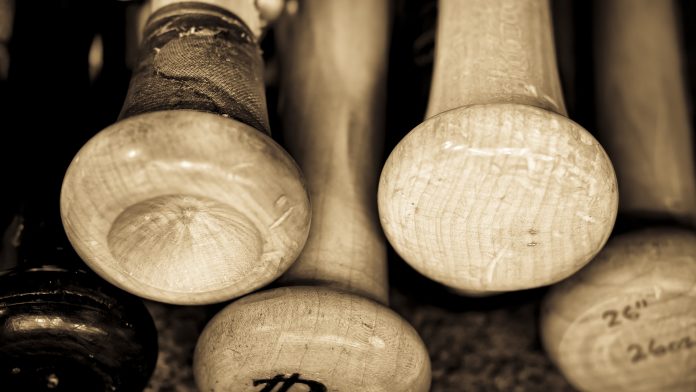 If you’re a professional baseball fan, you’ll appreciate all of the power that is generated by a piece of timber against a pitched baseball. Hitters dedicate hours of practice in an effort to perfect this art of connecting a wooden bat with a ball.

The goal of every swing is to drive the baseball as far as possible or at least where it can’t be caught to get a spot on the diamond. While a physicist would gleefully explain how all this energy is transferred to make the ball fly, there is a lot more energy necessary before a hitter can even take a bat into their hands. Here’s how energy has played a role in every wooden baseball bat.

Before a bat can ever be made, it has to come from somewhere – and unlike the old adage for money – the wood for a bat actually does grow on trees. And there is a large amount of energy that is necessary to get the raw materials produced before a baseball bat can even begin to be made.

We won’t follow the steps individually in detail, but in short, the machines that drop the trees to the saws that cut them, require fuel. It takes energy just to get the lumber to the yard to begin carving out a baseball bat, and it’s not just the electricity that runs the machines that manufacture the bats, it’s also the various types of products that are used to produce the fuel that fills the tanks and lubricates the machinery.

Ever since baseball was invented in the mid-1860s, many players use this finely tuned piece of timber to try and smack the ball out of the park. Baseball bats had to be rounded, but that was about the only stipulation. So early on, bats were either hand carved by the players themselves or turned on a lathe by a woodworker.

Since there wasn’t a lot put into making each bat, it didn’t take much more than a saw and a whittling knife to produce a usable piece of equipment. This gave rise to a tough problem that still exists – but only rarely – they break. This put hitters in somewhat of a predicament, especially if their favorite bat snapped in half during the middle of a game.

However, the problem of broken bats and the eventual evolution of the game of baseball gave rise to the manufacture of bats that were more efficient – partly leading the way for the legendary story behind the first bat maker.

It seems it all started when Pete Browning of the Louisville Eclipse baseball team snapped his bat in half during a game in the year 1884. Bud Hillerich, a wood carver who happened to be attending the game, invited Browning back to his shop to see what could be done to improve the design of the bat and ensure bats like Browning’s wouldn’t break during their games. It was then that Hillerich & Sons planted the seed to be the first company to design and manufacture their trademarked Louisville Slugger which eventually became the first real bat. The rest is folklore history that works to provide an account of how a famous baseball bat company got its beginnings. This story is also what people believe is still the same general process that is followed for producing the perfect baseball bats many players around the world use today.

And the business of making baseball bats is big business, especially if they are headed to Major League Baseball dugouts. This means dutiful employees from different companies work carefully to load and unload the lumber, work the saws, and monitor each step in the bat making process, which, of course, requires a lot of energy to produce.

The Energy behind the Bat

There is a lot of energy required just to get the timber and deliver it to where it will be processed. Once the wood makes it to the mill, conveyor belts move the crude lumber through a process of sizing to prepare it for the lathe.

Workers on site monitor each step of this process to ensure each block of timber is honed perfectly so that it can eventually become a bat. Each lathe is powered by industrial amounts of electricity, and to get the perfect diameter at each point in the manufacturing process, little-computerized lasers measure each bat from barrel to butt.

From there, every bat passes through quality control, using intense lighting, which helps skilled-workers detect bats with even the slightest imperfections so they can be discarded. There are also bookkeepers who log inventory, computers that track shipments, and wood burners that use electricity to imprint the company logo into each bat. From the lumber yard to the back office, the whole bat-making process requires lots of power and energy at a number of different levels to make something as seemingly innocuous as a baseball bat.

The bottom line is simple. Without access to energy, baseball players would be back to whittling their own equipment or having to hire someone to do it for them, game-after-game. Wooden baseball bats have certainly come a long way since 17-year-old Bud Hillerich saw a problem he thought he could fix.

While the baseball bat has evolved over the years with aluminum replacing wood at lower levels of the game, one fact still remains. Every time you see a player slug a baseball into the air, it took a lot more energy than just their swing to make it happen.