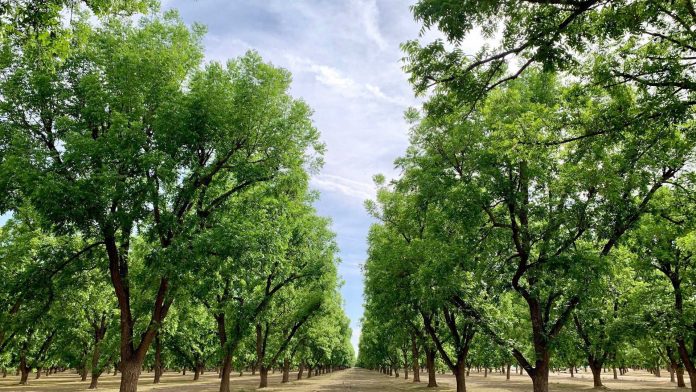 New Mexico is full of heritage, with many farmers and ranchers tracing family ties back to Homesteading during the mid-late 1800s, as this part of the Southwest started to become a U.S. state. The Land of Enchantment welcomes visitors with beautiful mesas, colorful art, cultural music and dance, and continually carries hints from Native American, Anglo, and Hispanic heritage that makes this state so distinct.

While flashy red and green chilies and high-flying balloons often get most of the national attention, New Mexico is a major-league pecan-producing state, second only to Georgia. To give you more perspective, one in five pecans in the U.S. comes from New Mexico.

There’s evidence that pecans were popular among Native Americans over 10,000 years ago, and that the word pecan itself is said to derive from the Algonquin word meaning something along the lines of ‘hard nut to crack.’ When sources of protein were exhausted, Native Americans discovered the sustaining powers of nuts. They realized that the pecan gave them just as much, if not more, energy and nutrition as the bison did. One theory for the origin of pecan pie suggests that Native Americans introduced the pecan to the French, who settled in New Orleans and – thanks to their innate baking expertise – soon after invented the pecan pie as we know it today.

According to New Mexico State University, about 70 percent of all pecans produced in the state are grown in the Mesilla Valley along the Rio Grande corridor in the southern part of the state, where the river provides essential irrigation water for the tree’s roots.

New Mexico farmers like Greg will tell you that the world wants New Mexico pecans, but they can’t grow enough to satisfy demand. It’s not just the fertile soil, water and sunshine that makes New Mexico an ideal place to grow pecans in this country. It’s affordable energy too. Pecans need energy, plain and simple.  Ultimately, energy is what enables farmers like Greg to manage, harvest and deliver their pecan orchards. From electricity to natural gas and diesel, they require all kinds of energy to power everything from water pumps, tractors, tree-shakers, and refrigeration systems.

Just like the Native Americans learned thousands of years ago, there is a lot of energy packed behind each pecan.

Whether its ice cream, pie, or trail mix, pecans are a special treat for those who can get their hands on them. Whether we ship them to Colorado, Kentucky or France, we can’t overlook the markets and systems we’ve created. We also can’t overlook the importance of the world supply chain – not just with goods and service – through goodwill, productive policies and exports. The U.S. helps other nations more than most realize.

Americans have always believed that responsibility exists to provide for others, when and where we can. It might even be safe to say that not exporting, and not helping others, is counter to our country’s DNA. Besides chilies and pecans – along with many other products and services – New Mexico has an abundance of energy that not only adds to our economy but is something we others use that we can continue to supply through exports, a product that everyone needs.

Many don’t realize this, but the U.S. is the most advanced, environmentally friendly first world country on the globe. We should spread that, and New Mexico is helping to do so, one energy-packed pecan at a time.