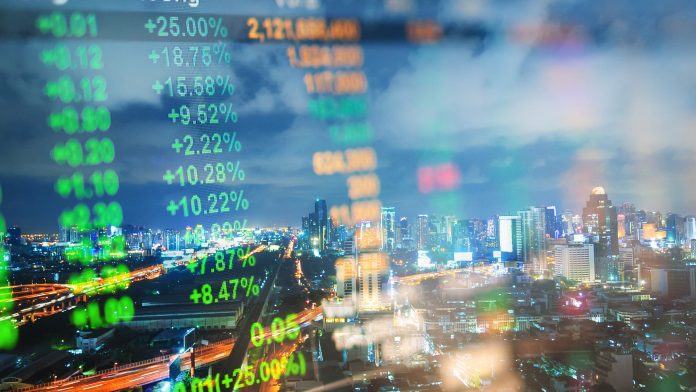 The price of a barrel of U.S. oil fell to a record low and even plunged briefly into negative territory.

The shocking drop sparked a wave of interesting price comparisons on Twitter with one user saying it was cheaper than a bottle of Coca-Cola: 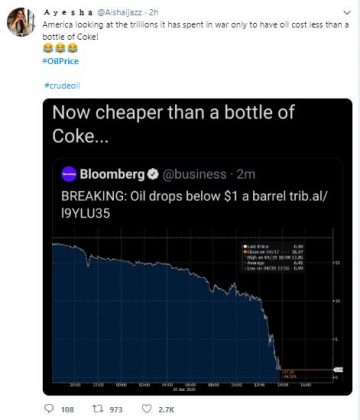 While another noted that, the barrel actually costs more than the oil: 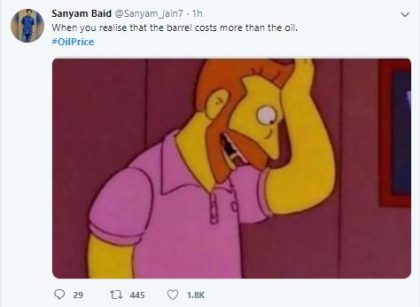 Usually, everyone likes low oil prices because it means cheaper gas at the pump. Low prices normally mean we spend more money and charge up the economy, but we have a little problem right now – no one can travel too far, and we have fewer places to spend our money now that COVID-19 has the majority of the nation locked down.

However, record low prices are not a good thing because it means hundreds of thousands of lost jobs and less investment in oil and gas production, so our ability to meet a rebound in demand will be compromised. And, we’ll end up with much higher prices when the pendulum swings the other direction.

So why did this record plunge happen? Didn’t we have that great deal with OPEC and its allies to cut production?

Yes – but the route from the well to gas pumps is a long one, so the supply-demand response time is a matter of weeks and months, not days.

First, a quick point about what the news media means when it refers to “oil prices.” They’re talking about two global price benchmark contracts – the U.S. one, West Texas Intermediate or WTI, and the British one, Brent crude.

What happened today happened to WTI, precisely because we have a problem – America’s oil storage is almost full.

That’s because crude oil futures traders deal in contracts for physical delivery. In the case of WTI, that means a futures contract is a deal to take physical delivery of a specified number of WTI crude barrels at Cushing, Oklahoma at a future date.

But traders almost never actually take delivery. Instead, at the end of the monthly contract, they kick the barrel down the road by swapping the old contract for the next month’s delivery contract.

The catch this time is that there’s no one to buy this month’s contracts because they’ve got no place to put it.

Think of it like this: If you had just filled up your car, and someone offered to fill your tank for 50 cents, you’d want to buy that gas but would have to say no because – well – you’ve got nowhere to put it. No is all that traders heard today when they were trying to offload their April contracts.

We all heard about the OPEC-Russia deal to curtail oil supplies that President Trump helped broker, but the effects of that will take some time to offset the clog in the system the COVID-19 shutdown caused. That’s why the U.S. government took the unique step of turning the Strategic Petroleum Reserve into the oil industry’s version of self-storage.

However, once the storage crunch eases, prices will probably climb back up.

The Brent futures contract is still around $27 a barrel, a sign that Europe’s COVID-19 lockdowns are easing, meaning more economic activity, travel and oil demand. And the U.S. futures contract for June is over $20, so that means prices should come back to a more realistic level.

Until then, we suggest keeping your day job and just enjoying the memes on Twitter until prices rebound. 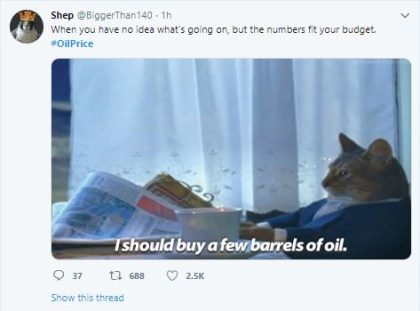