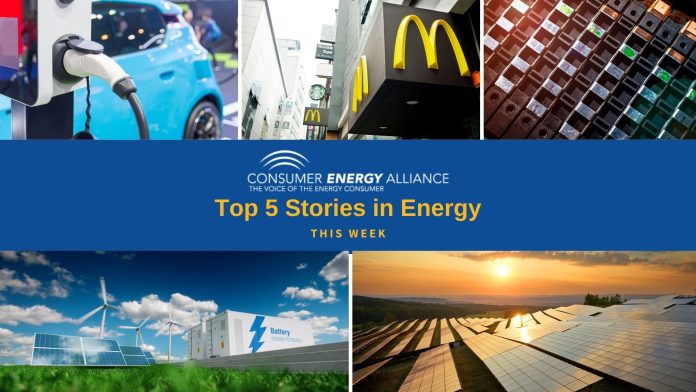 As temperatures continue to drop across the country, New Englanders are at risk of rolling blackouts. New England’s grid is often near the limit in the winter months, but severe weather combined with high natural gas prices and pipeline constraints could overwhelm the grid, requiring controlled blackouts.

Despite the clear need for abundant natural gas in commercial and residential heating and cooking, New York City’s City Council finalized plans to ban natural gas in new buildings this week. The move is being criticized for needlessly raising energy costs for consumers without reducing emissions – as renewable energy resources cannot currently sustain the city’s energy demand, leaving coal as the likely substitute in the absence of natural gas.

The Department of Interior released findings this week showing that offshore wind turbines off the coast of New York and New Jersey won’t cause significant impacts to the local environment. The news is a positive signal to the industry that a federal lease sale for offshore wind could occur in the near future.

Check out more energy news below!

5Swappable EV batteries are here…but not for everyone

For decades whenever a device was low on power, we’d open it up and replace the batteries. Then rechargeable batteries hit the market, and you could swap out the depleted batteries for charged ones. Lifewire reports that for many, that’s where EVs should be or could be headed — but not anytime soon for cars, trucks, and SUVs.

Keeping power flowing on the grid when it’s dark and still will be key to storing massive amounts of solar and wind energy. Anthropocene Magazine reports that flow batteries hold promise for large-scale energy storage.

A net-zero carbon McDonald’s has opened in what the company believes is a UK first. At the wind turbine and solar panel-powered restaurant, IT equipment and household goods make up the building’s cladding, signs are from used coffee beans and insulation is provided by sheep wool. BBC News reports that the fast-food company said it would be used as a “blueprint” for other sites and work has started to roll it out.

A coalition of dozens of U.S. electrical utilities on Tuesday announced plans to collaborate on a charging network for electric vehicles (EVs) with a goal of charging ports along all major U.S. travel corridors. The Hill reports that the coalition has not set a specific target for number of charging ports, but said its goal is to back the construction of enough for EV owners to travel major corridors “with confidence” by the end of 2023.

Researchers at Harvard have discovered how to convert solar energy into liquid fuel, potentially accelerating our switch to the alternative-energy source, according to an article in this month’s scientific journal Proceedings of the National Academy of Sciences (PNAS). Time reports that scientists have figured out a way of using sunlight to split water into hydrogen and oxygen. They then use a bacterium to convert the hydrogen, plus carbon dioxide, into the liquid fuel isopropanol.