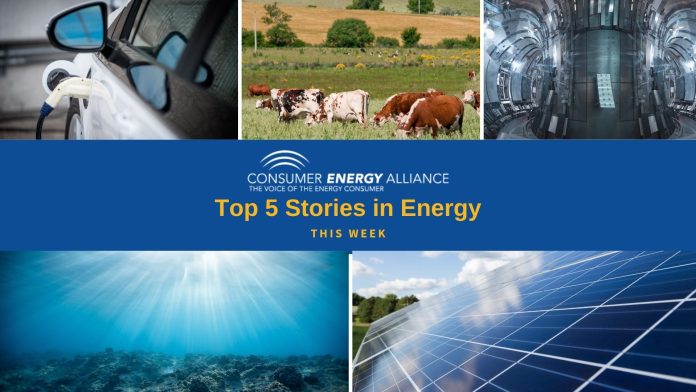 U.S. gasoline prices are on the rise for the sixth straight week as oil continues to surge on tensions between Russia and Ukraine, and prices aren’t dropping anytime soon. In response, some Democratic senators called for suspending the federal gas tax for the remainder of the year to help consumers struggling with rising fuel prices. On Tuesday, President Biden said there would be no Nord Stream 2 pipeline if Russia invades Ukraine, but did not specify how he would go about ensuring the controversial pipeline would not be used.

On Wednesday, the Biden administration announced that all options were on the table to address high oil prices and that they were in talks with both oil-producing and consuming countries.

Finally, at the end of the week the Labor Department reported that consumer prices jumped 7.5% in the past month compared with a year earlier, the steepest year-over-year increase since February 1982. Many economists expect consumer inflation to remain elevated well into this year as demand outstrips supplies in numerous areas of the economy.

Check out more energy news below!

A pilot program will soon be underway in the UK to test the draining of electric vehicles that are plugged into the grid, to balance supply during peak hours. The Daily Mail reports that the pilot will also test EVs to be used for energy storage when supply is high.

4Could solar panels help to save water?

Pilot projects are underway in California to install solar arrays above two canals, in an effort to learn more about the potential water saving opportunity in the drought-ridden state. EcoWatch explains that if successful, the projects would kill two birds with one stone; allowing California to generate more renewable energy, while providing canals with coverage to minimize water evaporation.

3An unexpected pairing could replace our reliance on expensive rare metals

Researchers have demonstrated that mixing carbon-rich sea pineapple shells with blood waste from the livestock industry produces electrical performances similar to that of rare metals. Science Daily shares how the finding is expected to be applied in next-generation energy devices.

A new ocean battery that operates by the same principles as a hydroelectric dam could store energy from renewable sources, helping to ensure energy availability during low generation. Optimist Daily explains how the battery is designed to be installed on the seafloor, near offshore wind turbines and floating solar farms.

Nuclear fusion was recently used to create a mini-star, which successfully produced enough electricity to boil about 60 teapots of water. CBS News explains that while the star required more energy to make than it emitted, the experiment was a big step in validating designs for a larger reactor.