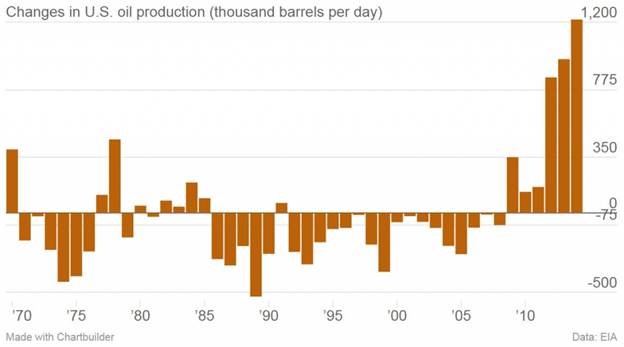 Record U.S. crude production, spurred on by advances in fracking and horizontal drilling technology, has helped drive down the global price of oil by creating an imbalance in supply. In 2014, U.S. oil companies set a record when they produced “1.2 million more barrels of crude per day from the ground than in 2013, the most dramatic increase in volume since the government began keeping track more than a century ago,” according to FuelFIx. Over the course of 2014, that extra 1.2 million barrels of oil a day is enough to fuel the entire East Coast (Maine to Florida) for nearly three months.

Producers have shifted their focus to more reliable plays in light of declining prices, and FuelFix reports that the EIA “expects oil companies to pump 8.1 percent more crude this year and 1.5 percent more oil in 2016.”

The chart below, produced by FuelFix using data from the Energy Information Administration, shows just how dramatic the increase in production is when compared to past years.