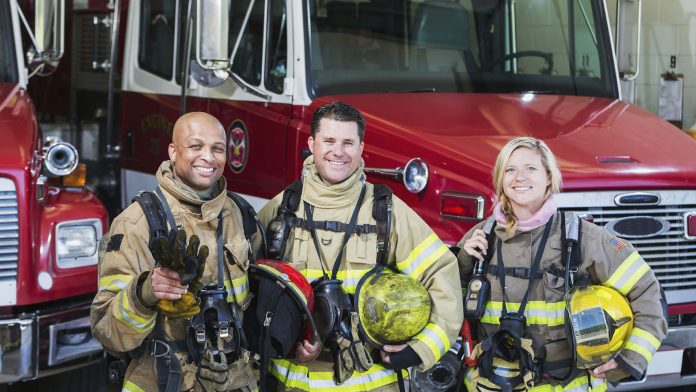 What keeps us safe? Some of us might think that it is a tightly locked home? Some people invest in alarm systems to keep them safe. For others, maybe it’s a large vehicle with all the latest safety features.

What makes one of us feel safe might not matter to another, but more likely, it’s likely a combination of those things (plus many others), but I’d argue its people, and the things they create and monitor, that make us safe.

I’m talking about the men and women in uniform, like our military, police, firefighters, first responders, and even energy employees that help keep us safe.

For example, energy plays two important roles in our military. First, our service men and women are constantly operating tactical equipment, from tanks to aircraft carriers and from masks to parachutes, while running operations and military bases, as well as other sophisticated technologies, which are all focused on keeping them, and us, safe.

This, of course, requires massive amounts of energy to ensure our defense system runs strong 24 hours a day, 7 days a week, 365 days a year — without interruption.  It is estimated that the U.S. Department of Defense employs nearly two million servicemen and women and is the largest single consumer of energy in the world. For example, the Air Force alone uses an estimated 2.5 billion gallons of fuel at a cost of $9 billion per year.

To power that many service men and women around the world requires energy from somewhere, and there are two obvious sources, either domestically from within our own borders, or from imports. Of course, the more energy we can produce here at home means less importing or fighting overseas to gain access to energy. In short, America’s safety, and that of our friends and neighbors depends on reliable energy.

Our military isn’t the only group that keeps us safe, at the local level, it’s our police, firefighters, and first-responders. From their vehicles to their equipment, energy is needed to keep our neighborhoods and inner cities safe.

But did you know that these local services are also funded from taxes on the energy industry? That’s right; tax revenue from local energy production — called a severance tax on mineral resources and property tax for renewable resources — goes to local communities to pay for things like their police and fire departments, as well as the roads they use to get to from point A – B (sometimes, even in an emergency.)

Rules also keep us safe. And to the extent you believe that our government is composed of people – voted for by the people and for the people — then regulations are also meant to keep us safe. Federal, state and local government work together to help ensure energy is developed responsibly. That means energy is produced in a manner that protects our environment, and our people at the same time.

The BP Statistical Review of World Energy, a leading resource on carbon dioxide tracking, revealed that since 2005, annual emissions have declined by 758 million metric tons. That’s the largest decline of any country in the world and is nearly as large as the decline for the entire European Union during that same time. In February this year, the U.S. Environmental Protection Agency (EPA) declared gross greenhouse (GHG) emissions decreased by 2 percent between 2015-2016. Now, GHGs are just 2.6 percent above 1990 levels, 11.6 percent below 2005 levels. Another EPA report even states that “All told, total greenhouse gas emissions are approximately 13% below 2005 levels, or roughly halfway to the U.S.’s abandoned Paris Agreement target of 26% below 2005 levels by 2025.” That means organizations, companies, and people are working hard to meet our climate goals while also considering the benefits energy brings to everything around us, including our safety.

So the next time someone tells you we’re ruining the environment and our safety is in jeopardy, share these facts and let them know we can produce the energy we need while keeping our families safe.