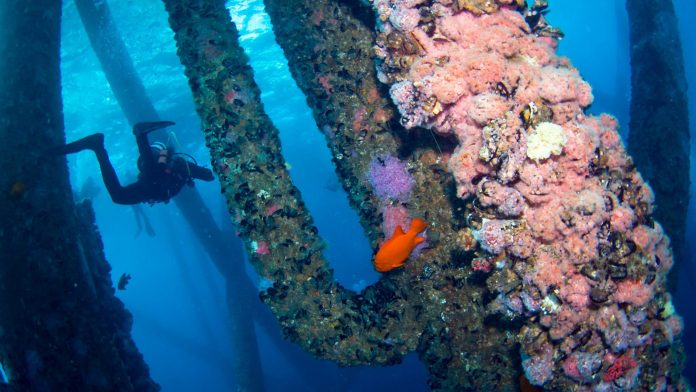 With so many changes happening to the environment every day, it has become increasingly important to conserve, as well as preserve, our oceans and the delicate balance of life contained within them. Many of the natural underwater habitats that fish and other marine life rely on to survive are dying or are being destroyed by invasive species. That is why it is so important to make sure there is a way to allow this sea life to thrive, which is why the Rigs to Reefs program is vital to the environmental enhancements being done off our coasts. This program allows the transformation of off-shore rigs from stark metal landscapes into beautiful reef structures.

A single, standard, eight-legged rig can provide acres worth of space for new marine colonies to grow, and rather than having these structures hauled out and removed once the platform has ceased production, the Rigs to Reefs program works to ensure these structures remain in place as viable artificial reef environments. Once the equipment is removed and the rig is fully decommissioned, companies can then sink these platforms, and allow marine life to have a safe place to grow. Not only does this save time and money, it is particularly useful for areas where there has been an oil spill, invasive species, or bleaching since reefs have a hard time recovering from these types of events in many cases.

Currently, there are more than 490 offshore platforms that have been “reefed” according to AICHE.ORG, attracting new ocean life and allowing it to flourish and make the rig its home. These sunken sanctuaries allow fish and coral to latch onto the structure to lay eggs in a protected and thriving area and can help revitalize species that are becoming obsolete simply by giving them a place to reproduce and grow freely. It’s not only a win for the local environment, it’s a win for the companies and local economies as well. These oil riggers can save up to $500 million per rig by decommissioning them and sinking them rather than hauling them back to shore and dismantling them. As new marine life inhabits these artificial reefs, bringing in more fish and other sea life, sports fishermen are more likely to move to or visit the area, positively affecting the economy and creating a positive increase to the state’s tourism numbers.

In places where these reefs are already located, the fishing industry has not only seen an increase, and in some instances – a resurgence, in the amount of fish being caught but in the numbers of previously rare fish that come out of the areas where these sunken giants sit. Commercial fishing has also seen increased success, especially where large populations of marine life have been over-fished, bringing in more money to the economies of these local coastal towns. States have even created legislation designating money to help keep the Rigs to Reefs program active in their communities. And while only 10 percent of rigs are being reefed, the pace seems to be picking up for companies who are looking to save money and be more environmentally and socially minded.

So as the energy industry and environmentalists look to save money and our oceans, the Rigs to Reefs program is proving to be beneficial not only to these groups but coastal towns and their communities alike.