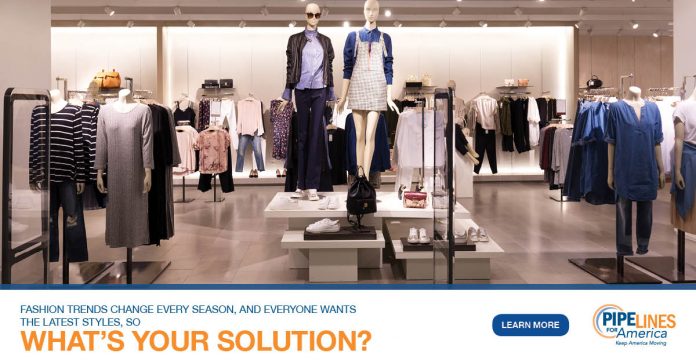 Whether you’re a woman or a man, you’ve likely been in a predicament where an event has come up, the weather’s changing, or there isn’t anything in your closet that’s new, or fits. So what is the first thing we do? Go shopping.

As experts, elected officials and activist groups, like Greenpeace, look for areas where American consumers can reduce their carbon footprint, and cut the amount of waste occurring annually, many of them should look no further than the clothes on their backs.

Fashion is one of the few industries that was able to continuously grow by 5.5% over the last decade, becoming a $2.4 trillion industry in 2017 when consumer confidence was at an all-time high. If the fashion industry were a world economy, it’d be ranked seventh. So while roughly 80 billion items of clothing, shoes, and accessories are amassed annually worldwide, Americans alone averaged almost 68 garments a year in 2018. That’s almost 22.3 BILLION in apparel – just in the United States – or the equivalent of 33 pieces of new apparel for every one person on the planet!

The desire to have the latest and greatest looks at a low-cost is one of the catalysts for fast fashion. While few can afford clothes and shoes seen on the runway, companies like H&M, Forever 21, Zara, Steve Madden, and Aldo are providing look-a-like patterns and products, at affordable prices. One of the biggest areas of growth is in athletic wear, which extensively uses synthetic fibers and is primarily manufactured overseas.

Instead of restocking shelves with pieces that sell out quickly, these companies move to the next “hot” items, and so do consumers. Although shoppers are buying 60% more clothing now than in 2000, these garments are only kept half as long!

This means stores are constantly putting out new items at record rates. It’s not just brick and mortar retailers either. The ability to have the “perfect outfit” whenever want one is at our fingertips – and shoppers take advantage of it. With over 40% of Americans starting their product research on Amazon, 28% end up purchasing any one of those items at least once a month.

Creating all of this fashion is no easy task either. Not only are there the employees coming in for design meetings, but there is also the manufacture of materials and the products themselves. Add in packaging and the transportation of that product from the country or state where it was made to the retailer and finally the transportation to your home – and you’ve got an energy supply chain that is more extensive than you ever realized.

Ultimately, this convenient fast-fashion craze would not be possible without energy. From fabrics and their blends like spandex, nylon, and acrylic which are made using traditional fuels through our nations petrochemical complexes to transportation, much of the fashion industry relies on affordable fuel. So next time you think about ways to reduce carbon emissions, or your own carbon footprint, realize that it’s more than just a switch to renewable energy resources – it’s the clothes and shoes we wear too.