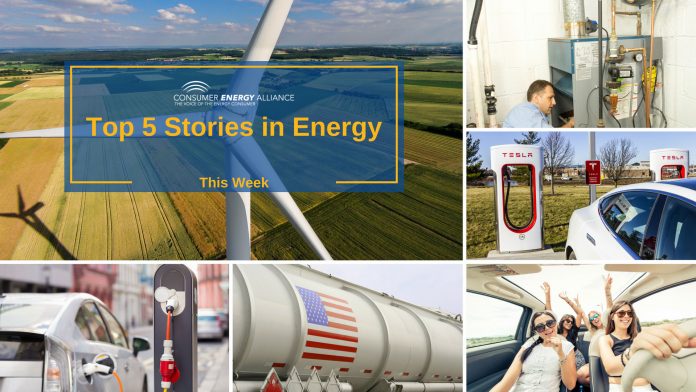 5It’s not just tennis shoes getting a plastic redesign, now it may be your roads.

TechniSoil Industrial is the company that has designed a new process for covering roads with a material that is, in part, made from recycled plastic bottles. Recycling roads is not a new concept, but it was only possible to recycle the lower layers, which consists of soil and aggregates. The new technology developed by TechniSoil has allowed for the top layer – what we know as asphalt – to be recycled as well. The company found that these roads can last 8 to 13 times longer than a standard road, according to lab tests. Can we say fill my local pothole, please? Check out the full story, here.

4It’s a technology that has helped America lead in emissions reductions, yet some individuals want it to go away.

America’s carbon dioxide emissions have plummeted and it’s all thanks to fracking. While the term itself fuels a political debate, the process has been proven as a “boon to environmental progress.” Fracking has helped the U.S. on the road to energy independence, which was only a glint in our eyes less than ten years ago. Yet, there are some who want us to believe rhetoric that is built out of fear and not on science. The Boston Globe Editorial Board breaks it down here.

3Once, it was a technology only the military and other rural outposts, now it’s coming to an airport near you.

The aviation industry has long been accused of being outdated in carbon emission reduction. Pittsburgh International Airport wants to prove us all wrong as they soar above those accusations – putting their money where their mouth is with an innovative solution – utilizing a micro-grid. While micro-grids aren’t new, utilizing this technology for an airport, including both terminals, the airfield, the properties Hyatt hotel, and Sunoco gas station, certainly is. For more from PIT – check out the story here.

2Policymakers in Albany, New York played a dangerous game of musical chairs, except the one left without a seat in this version of the game left its own residents without a chair.

Policymakers in New York have been under fire for the recent National Grid debacle they created. Now the state’s administration is urging one of the largest utilities to restore service to homes and businesses after it denied various infrastructure projects across New York. Following a very public letter from the Administration to the utility, PSC Commissioner Diane Burman asks that state leaders rely on current energy sources before converting to cleaner, renewable energy. The question is, when will the citizens of New York realize that this shortage has been a long time in the making – up in Albany? You can read up more on this debacle here.

1The unintended consequences of halting hard rock mining today can only be realized if you look to developing nations – but are you?

When people talk about mining, they might envision a soot covered miner like Derek Zoolander coming up from a coal mine, but mining is more than just coal. These various types of mining are the foundations, and in some instances, the primary element needed for some of our leading technologies. Without these rare and precious minerals the path to renewables, electric vehicles and battery technology would be severely delayed. Worse, a May 2019 report from Foreign Policy shows that China controls 80% of rare earth elements, amongst other crucial mineral elements, and that doesn’t fair well for the U.S. (or its consumers) in the latest round of trade deals. So do you know what the trouble with critical minerals is? Find out here.