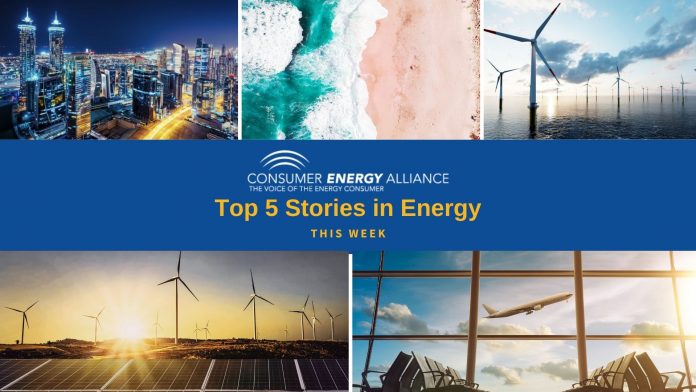 One of the biggest stories across the country this week was the Colonial Pipeline ransomware attack, which caused the pipeline to shut down for six days and created a gas shortage through the eastern United States this week with people scrambling to fuel up their vehicles. The pipeline came back online Thursday afternoon after the company reportedly paid a ransom of nearly $5 million to hackers.

Meanwhile, the Midwest is dealing with pipeline woes of their own, with the imminent threat of the Line 5 pipeline being prematurely shutdown, which would risk at least 33,000 jobs and a minimum of $20.8 billion in economic losses to consumers in Michigan, Ohio, Indiana and Pennsylvania, according to an analysis by CEA.

On the renewable energy front, the Biden administration approved plans for an offshore wind project off of Martha’s Vineyard this week. The installation will be the first major wind farm off the U.S. coast.

Looking for more energy news? Check out our five favorite stories below!

The International Energy Agency (IEA) announced this week that renewable power capacity grew 45% over last year, raising its growth forecast for wind and solar power for the next two years. The Wall Street Journal reports on how renewables were the only energy source for which demand increased last year.

4Could robots generate energy on Mars?

Generating energy on Mars will be difficult to say the least. Popular Mechanics reports that robots wielding gigantic kites could be the answer thanks to high wind speeds on the red planet.

3Airports: The next solar energy hubs

Airport are being looked at as a future source of clean energy producers. OilPrice.com shares how a new study found that if all of Australia’s government-owned airports installed large-scale rooftop solar systems, they could collectively produce enough energy to power an entire city–136,000 homes.

Fatih Birol, President of the IEA spoke during the Association for Renewable Energy Research’s online conference about how all renewable energy sources are crucial but hydropower and geothermal resources need more attention. Hurriyet Daily News quoted Birol saying, “Hydroelectric and geothermal energy is not on the agenda worldwide enough. This June we will release a publication dedicated solely to hydropower.”

While there is still talk of making self-driving cars a reality, researchers are now looking at other components of smart cities and how they all will work together in the future. Singularity Hub explains how a project called Woven City was unveiled in 2020 and this week Toyota announced it’s partnering with Japanese petroleum company ENEOS to build a hydrogen fuel cell system that will be the city’s source of power.