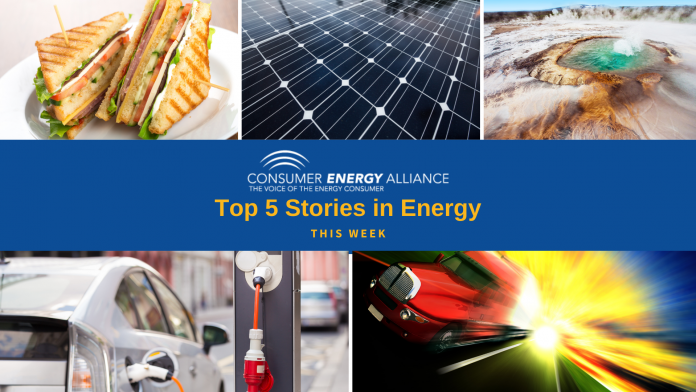 Earlier this week 14 senators introduced a bill that would re-impose sanctions on entities involved in the construction of the Nord Stream pipeline after the Biden administration announced it would waive them earlier this week, a move that made many question why he would treat a Russian gas pipeline better than the Keystone XL in America.

President Biden issued an executive order yesterday that directs agencies to launch or expand efforts to analyze and lessen economic risks stemming from climate change. The good news is that the U.S. is already on the right track to meeting our climate goals. CEA found that U.S. emissions decreased across the board from 1990-2019, and that just last year global energy-related CO2 emissions declined 5.8%.

Meanwhile, oil prices rose sharply, but were positioned for an overall fall as investors braced for the return of Iranian crude supplies after officials said Iran and world powers made progress on a nuclear deal. Overall analysts remain upbeat about fuel demand recovery this summer as vaccinations globally would permit more people to travel.

Speaking of travel, be sure to check out this week’s energy news as you finish making your Memorial Day plans!

A global lithium miner wants to extract more battery metal from old cars as demand surges and aging electric vehicles are traded in. E&E News explains why companies are trying to grab a share of the market for recovered battery materials as lithium supplies show signs of constricting.

The design of next-generation solar panels can now be improved by using thin films used in some perovskite solar cells – something that closely resembles a sandwich. Sci Tech Daily highlights how new research has shown a benefit for solar films being stacked in a sandwich-like structure, where two layers of the same type (the bread) are surrounded by one central layer (the filling).

3Prototypes for future trucks are unveiled

A prototype of a truck for future electric technology was unveiled this week as part of a company’s plan to focus on hydrogen and battery trucks. Associated Press reports on how companies are looking at how battery and hydrogen-powered trucks could be competitive with diesels on cost later this decade.

Google announced its plans to develop next-generation geothermal technologies to help cut their reliance on carbon. CNET highlights how the company will turn to geothermal energy to power data centers and infrastructure throughout Nevada.

1Frameless solar panels for the future

Researchers have discovered a new way to install photovoltaic panels on the roofs of commercial buildings. New Atlas breaks down how frameless and lightweight panels can be adhered directly to a roof.