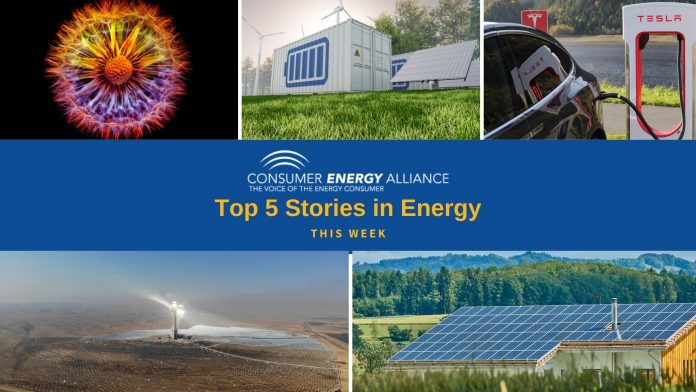 This week, the Biden administration released an ambitious blueprint for nearly half of the U.S. electric grid to be powered by solar energy by 2050. Some question the feasibility of the move, given that currently, solar energy powers only 3% of the grid.

But that’s not the only grid concern that was brought to the forefront this week. Nearly two weeks after Hurricane Ida, many people are still without power, leaving many to wonder if our grid and infrastructure can withstand storms like Ida in the future. Generator sales are reportedly up, showing the lack of confidence people have in their grid’s reliability.

However, some families in Arizona’s Navajo Nation can finally stop relying on the generators they’ve had to use for decades. The Navajo Nation and the Navajo Tribal Utility Authority this week finalized an agreement to extend power lines to homes in the community of Tonalea, Arizona. This extension will provide 23 Navajo families with electricity – some of whom have lived their entire lives without electricity.

In other news, new research tallying global cities’ emissions found that the top 25 are responsible for 52% of the planet’s urban greenhouse gas emissions. And twenty-three of those are in China – showing once again that U.S. produced energy is far more environmentally friendly than some of our global counterparts.

Check out more of our favorites stories from this week below!

Researchers are currently focused on innovative concentrated solar thermal (CST) energy, a type of power plant that can produce power after dark. Big Think explains how CST power plants gather solar photons and use them to heat water, which turns a steam turbine, which turns an electrical generator.

4The potential role of microgrids in a renewable grid

A new Department of Energy (DOE) report found that solar could account for about 40% of the US electricity supply by 2035, which helps to demonstrate the role microgrids could play in the future. Micro Grid Knowledge sparks interest in how solar technologies and microgrids can interact with the full energy system.

China released a plan on Thursday that sets out a goal to develop its pumped hydro storage system by 2035. Reuters highlights how this effort it to in an effort to boost renewable energy consumption and ensure stable grid operation.

Because they can store more energy, solid-state batteries could be game changer for electric vehicles (EVs). Reuters breaks down how the batteries that are currently used in devices such as pacemakers and smart watches can charge faster and offer greater safety than liquid lithium-ion batteries.

1The future of laser-initiated fusion

The quest to make fusion power a reality took a big step recently when a laser-initiated experiment reaction showed how close the technology is to achieving power production. Tech Crunch reports on this development and its significance for creating a new chapter in physics: enabling controlled nuclear fusion with positive energy gain.