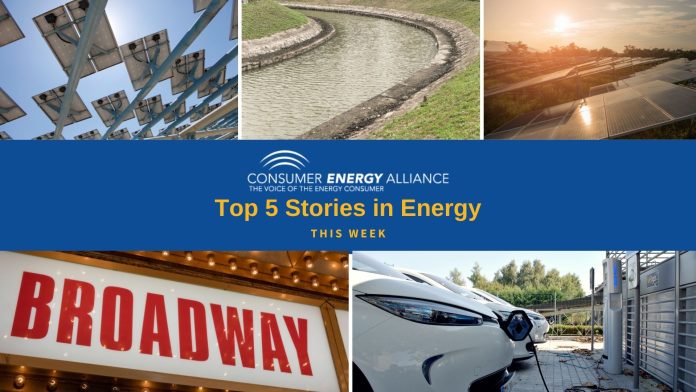 As Ukrainians enter their third week of fighting to defend their country from Russian occupiers, American GOP Senators are attempting ban Russian oil imports by adding language to a House-passed bill to end normal trade relations with Moscow. While the impacts of such a move would be enormous, some experts predict that choking the Kremlin of the more than $24 billion we pay in Russian oil imports every year will leave them bankrupt and hinder their war efforts.

The international geopolitics affecting our energy doesn’t stop at the Russian border. Reporting this week shared that the federal crackdown on China’s alleged forced labor abuses could threaten 67% of U.S. utility solar projects this year.

The EIA this week shared that they expect crude oil prices to surge over $100 per barrel in the coming months. Unfortunately, high energy prices are here to stay unless our lawmakers make some major energy policy course corrections soon. Like ending the de facto ban on onshore and offshore leasing and opening the Gulf of Mexico for energy development. Or approving critical infrastructure needed to transport fuel like Line 5 – a pipeline project that if cancelled, will cost Midwesterners over $5.8 billion more each year for gasoline and diesel.

Want more of this week’s biggest news in energy? Check our top five favorite stories below.

Target has rolled out a new visible display of its efforts to become a greener company: Massive carports topped with solar panels that will power a big-box store in Vista, California. CNBC reports that the solar panels in the parking lot will produce enough renewable energy to power the entire store, from its refrigeration to its heating and air conditioning.

When we think about green technology, things like cars and power plants come to mind before entertainment. But Broadway Stages is the first film and TV production company to build solar-powered stages. Inhabitat reports that Broadway has invested in more than 100,000 square feet of green infrastructure, including 50,000 square feet of solar arrays.

3Solar canals to the rescue

A public-private-academic partnership plans to install solar panels over water canals in California – one of the world’s largest water distribution systems – in a bid to help preserve the state’s dwindling water resources. Project Nexus is set to be the “first-ever solar panel over canal development in the United States.” Treehugger reports that if the pilot project proves as a cost-effective way to produce clean energy and save water, similar installations could be built atop California’s canal network.

The first commercially viable lithium metal solid state battery is set to increase the autonomy of electric cars. QuantumScape claims their battery can increase the autonomy of an electric and can charge from 0 to 80% in just 15 minutes. Brighter Side of News reports that the battery can retain more than 80% of its capacity after 800 cycles, which represents about 240,000 miles traveled in an electric car.