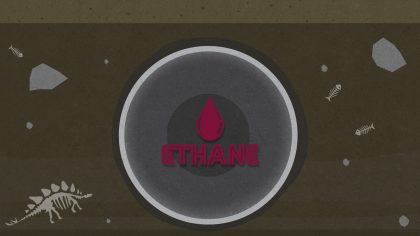 Natural gas has several different elements that make it up. The second largest percentage of those elements is ethane. Ethane is the primary ingredient in making some of the most used and important consumer products.

The food safety industry relies heavily on the products that come from ethane to make ethylene. That’s because ethylene is used in packaging to prevent food contamination and to help store food during transport and at the grocery store – think E. Coli – eew. It’s also in our food wrappers, plastic grocery bags, and even our milk jugs. And, if you didn’t know – but now you know – it’s also used to create something called copolymer, which is used for manufacturing solar panels. Get ready to soak up the sun!

Ethane can also be made into polyethylene for protective coatings that bunch wires together, so they’re not exposed, helping them to avoid fires and so that they don’t get damaged. It is also used for municipal and industrial water projects to protect against other chemicals, cuts, weakness, corrosion, and earthquakes. It’s so durable and dependable; the military uses it to make helmets that protect our troops.

You can also use ethane for Polyvinyl Chloride – or PVC. PVC is used in construction, as insulation for groups of electrical wires, like pipes for plumbing – just look under your sink – for siding on your house, and in a form you may not have even thought of – flooring for environments that need to stay sterile for health reasons, like hospitals, schools and clinics.

The point is, ethane is like the caregiver of NGLs, it’s always making sure we’re safe – and not sorry. Without it, planes couldn’t take off in the winter (psst – it’s in de-icing fluid) and hospitals would not be sterile since it’s used for disinfectants (especially the instruments – but don’t worry – maybe you won’t get what they had.) Remember that shirt you went to the gym in – don’t worry – detergent can help, thanks to ethane. Oh, and let’s not forget it’s also helped to reduce gas mileage by making cars and trucks lighter than their BIG HUNK’A METAL counterparts from the 70s and 80s. That’s good, right?